ASUU Strike: NANS to shut down airports from September 19 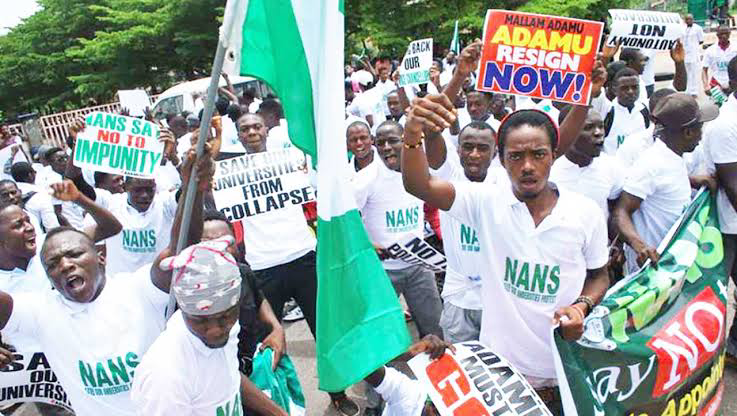 The National Association of Nigerian Students (NANS) has said that it will shut down airports across the country, promising to ground their activities over the 7-month-old strike by the Academic Staff Union of Universities (ASUU) which has negatively impacted on them.

This is as the students have criticized the Federal Government’s ‘No work no pay’ saying that it is unacceptable to them.

This is coming a few days after the students blocked the Lagos-Ibadan expressway in protest over the lingering strike causing a lot of gridlock on that axis.

This was made known by the Chairman NANS National Task Force on ‘End ASUU Strike Now,’ Ojo Olumide, while speaking in Akure, Ondo State, saying that students were already tired of pleading with both parties over the need to end the strike.

Olumide said that the 4-day shutdown of busy highways and expressways had been a success, and then hinted plans to disrupt international travels from September 19, 2022, in order for “the bourgeois and the government to feel the pains that had subjected students to in the past seven months.”

Olumide said, “We shall begin another round of protest next week by storming the airspaces on Monday, 19th September 2022 to #OccupyTheAirports#. We want to let the world know about the pains and anguish students are going through.

“Nigerian students whose parents create the commonwealth cannot continue to be suffering at home alongside our lecturers while the few who gain from our sweats and blood have their kids abroad jollying and flexing.

“We call on students to rise and join us as we take our destinies into our hands. Our demands remain consistently clear and simple.

“We call on ASUU leadership for a meeting as soon as possible to discuss solidarity actions and plan for the next phase of the struggles. Nigerian students are not subjected to security agencies and we haven’t seen any step from them to avert ASUU strike.

“They should give enough budgetary allocation we are not asking for 26 percent we are asking for 22 percent. We pass a vote of no confidence on both Ministers of Labour and Education. We call on the Buhari-government to pay all outstanding arrears and salaries of the lecturers.

“The policy of ‘No Work No Pay’ is a Fascist one; it is, therefore condemnable and unacceptable to all the millions of students in Nigeria.

“We will, by this statement, not beg again. We shall be mobilizing all students to shut down the country. No Education, no movement!”

Olumide also criticized the Minister of Works and Housing, Babatunde Fashola, over his purported comment on the barricade of federal roads by the students, noting that the strike had continued to linger due to the absence of children of the political class in public universities.

He said, “Through Nigerians, the federal and state governments became and are still uncomfortable with our protests. Instead of them responding to us responsibly and what have you we were shocked that the Minister of Works Babatunde Fashola came up with an illegal utterance befitting of only rabble-rousers and political irritants by calling out fundamental Human Rights “illegal!”

What Minister Fashola has done is amazing. After all, the camera he found at LekkiTollGate after the massacre is still a mystery. Yet, the minister’s outburst is also another evidence that the Buhari-government hates real educational development.

“They are never apologetic and are hell-bent on destroying every remnant of state welfare left. They prefer to kill the public schools instead of revamping them. Nigerian students are not surprised that the Buhari- government does not care about public education. After all, all the politicians have their kids schooling abroad while the children of the masses that constitute 99percsnt of the population are only fit to be thugs, hard workers, and sex slaves.

“We dare say that this cruelty will not continue anymore and, it is on this note we call on the national leadership of ASUU to synergise with Nigerian students in achieving this struggle that we have commenced by ensuring that a state of emergency is declared in the educational sector.”