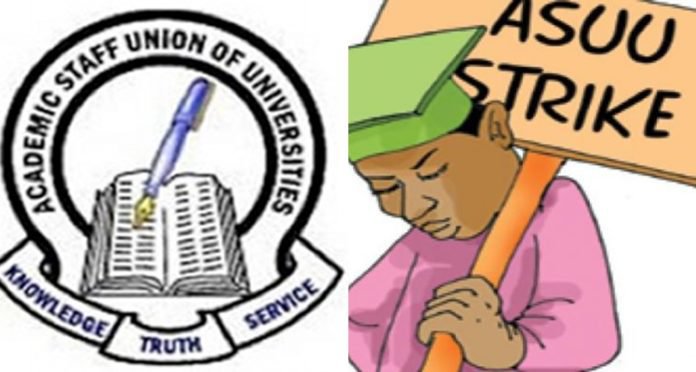 The Committee of Pro-Chancellors of State-Owned Universities (COPSUN) says the federal government should not pay members of the Academic Staff Union of Universities (ASUU) for the period they are on strike.

ASUU has been on strike since February 14 over the federal government’s failure to meet its demands, including the funding of universities and lecturers’ salaries and allowances.

Meetings between the government and ASUU have not resulted in suspension of the strike, and in August, the union announced an indefinite extension.

However, with the setup of another committee recently, the government had said the ‘no work, no pay’ decision may be reconsidered.

In a communique after its 57th quarterly meeting held on Tuesday, COPSUN said the strike has heightened tension and impacted the university system negatively.

The committee, however, urged federal and state governments to ensure improved funding of tertiary institutions.

“Resolved that to maintain international best practices and be recognized among first rated Universities, the governments at Federal and State levels should improve on the funding of their universities and enhance the welfare of the workforce, adding that state governments should exercise restraint in establishing new universities but invest heavily on the existing ones to improve on the quality of their infrastructure,” the communique, signed by Michael Awobifa, reads.

“Saddened that the Academic Staff Union of Universities (ASUU) have continued to defy all pleas and entreaties by parents, policy makers and well-meaning Nigerians to call-off its seven month-old industrial action which has heightened tension in the University system, the Pro-Chancellors believed that the damage caused by the disruption in the university System cannot be rebuilt by the reform being sought by the Association.

“Recalled that while it has always supported the call for reform in the education sector, COPSUN restated that the ongoing strike which has been unnecessarily prolonged was obsolete and ASUU cannot continue to apply the same strategy and expect a different result.

“Observed that the university system lost over 50 months to strikes since 1999 resulting in elongated academic calendars with the nation paying heavy price, while the students, parents and the university workforce have been put in perpetual position to miss and lose many life opportunities.

“Relieved that the Federal Government agrees that State Universities have the right to adopt or reject agreement reached with ASUU by the Federal Government because education is on the concurrent legislative list. COPSUN however reiterated that it would not be coerced to adopt hook, line and sinker any agreement to which it was not a party ab initio. It pledged that State-owned universities will continue to negotiate with its employees in accordance with the terms and conditions of their engagements.

“Astounded that the lecturers that abandoned classes for almost an academic session are clamouring for salaries they did not work for, the Pro-Chancellors called on the Federal Government to be courageous to enforce the extant rule on “no work no pay” as failure to apply rules in the past led to impunity in our society.

“COPSUN urged the political class to give greater attention to education with substantial increase in the budgetary allocation, arguing that education is the key to the future of the country. It further appealed to the various political parties jostling for power to initiate innovative reforms in the education sector in their manifestos in order to part ways with the persistent crisis in the sector.”