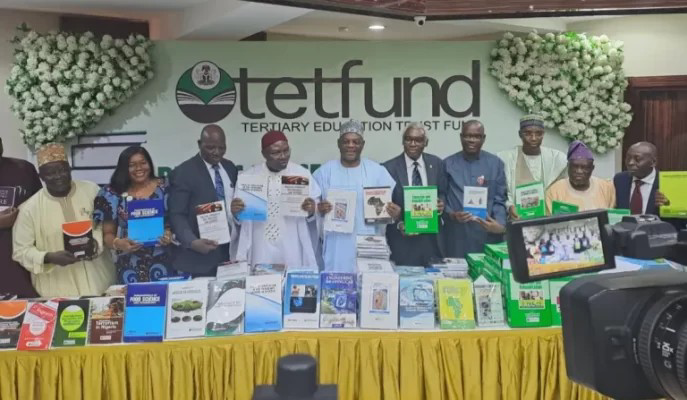 The Academic Staff Union of Universities (ASUU), has called for the increase of education from the current 2.5 percent to 10 percent.

ASUU president, Comrade Emmanuel Osodeke, made this call on Thursday in Abuja at the public presentation of 50 textbooks sponsored by the Tertiary Education Trust Fund (TETFund).

Osodeke, who described TETFund as a brainchild of ASUU, lavished praise on the agency for transforming the nation’s higher education sector.

He said the increase of education tax being collected by Federal Inland Revenue Service to 10percent would enable TETFund mobilises more funds to totally address challenges confronting the sector.

While decrying poor attitude of some big companies and wealthy Nigerians on the payment of education tax, Osodeke said there is need to reposition and expand the education tax net to bring about more resources for tertiary education institutions.

Unveiling the books, Minister of Education, Malam Adamu Adamu, said the Academic materials were published by Nigerian authors under the sponsorship of the Tertiary Education Trust Fund (TETFund), adding that the publications would end the dominance of foreign academic materials in the nation’s education institutions .

Represented by the Minister of State for Education, Honourable Goodluck Nanah Opiah, Adamu said : “Overtime, Nigeria’s tertiary education institutions became dependent on books published outside the country with the attendant consequences of the herculean processes and unfavourable foreign exchange rate.

“It is equally worrisome that the quality of most academic publications in our country leaves much to be desired. It is therefore expected that nourishing the culture of quality authorship and the production of indigenous books will not only ensure the availability of relevant books in the diverse subject areas taking cognizance of our local environment and sensitivities but will also safeguard national pride and reduce the demand for foreign exchange.”

The minister, who commended TETFund for the publications, challenged the agency and authors to also produce books with the nation’s indigenous languages.

” I also charge TETFund and the academia to go beyond publishing in English Language to promoting authorship in our local languages in line with the recently approved National Language Policy,” he said.

On his part, Executive Secretary of TETFund, Arc. Sonny Echono, commended the authors, TETFund’s Technical Advisory Group (TAG) and others for the publication of the 50 new textbooks.

“TETFund is committed to do this. TETFund has set a minimum target of 50 textbooks per year. I am sure that TAG we also surpass our expectation,” Echono said.

The TETFund boss also assured that the newly published books, would be distributed to tertiary institutions’ libraries at no cost.

” All the books we have published so far, the initial publications are going to be distributed to the libraries of our tertiary institutions free of charge. It is the subsequent publications that students will be buying or other researchers wil buy.

” We are also going to help them because the ministry has established education cloud, we are digitising our thesis and records, through that ecosystem, you are going to have digital copies of these materials. All we are going to do now is to ensure will protect the authors’ intellectual property rights and once that is done, they are going to be available in the internet,” Echono said.

On the ASUU president’s clamour for 10 percent education tax, Echono said :”I am aware the current administration has done a lot in this regard. Mr President in just two years has taken two bold steps, I know there is a degree of pushback from industries, from NECA about the issue of multiple taxation and the difficult operating environment, but seeing how important education is to national development, this president on two occasions; last year it was increased from 2 to 2.5 percent and in the current Finace Bill, Mr President has ensured that it is increased to 3 percent. I don’t want to preempt until it is signed, but that shows the commitment of the president that wants to leave a legacy.

“Everyone knows that what is happening in most tertiary institutions is through the instrumentality of TETFund so increasing TETFund funding will go a long way in achieving that, whether we can go to 10 percent currently is a conversation that will be held somewhere else.”

Also speaking, Chairman of TETFund’s TAG, Prof. Charles Aworh, said the event was epoch-making because 40 of the 50 textbooks were published by Academic Publishing Centres established by TETFund.

“We are witnessing today the realization of an important goal of the TETFund Higher Education Book Development Intervention Project which is reviving academic publishing in Nigeria’s tertiary education institutions,” he said.

Speaking further, Aworh pledged the commitment of TAG to meet its mandate of delivering annually a substantial number of high quality textbooks to the Nigerian tertiary education system.

“I should add that among the 50 titles of academic books being presented to the public today, three are from PhD theses of our young academics that have been converted to books. Twelve are multi-authored basic or fundamental texts commissioned by TETFund and written by some of our best intellectuals in the academia, private sector and government agencies.

“These books though international in outlook, are written bearing in mind our peculiarities and local needs and with practical examples that reflect familiar realities and experiences that our students can identify with. Forty-three of such books in diverse subject areas, identified by needs assessment, ranging from History, Women and Gender, Literature in English, Communication and Media, Mathematics, Physics, Chemistry, Biology. Software Engineering, Materials Engineering, Medicine, Veterinary Surgery. Agricultural Economics, Political Science, Nigerian Legal System, Special Needs Education and Rehabilitation Sciences to Pension Systems, Actuarial Science, Modelling and Simulation, Bioinformatics and Artificial Intelligence have been commissioned by TETFund and twenty-nine have so far been completed.”