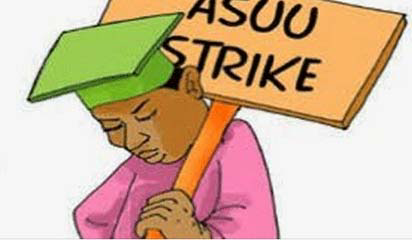 The President of the Academic Staff Union of Universities (ASUU), Emmanuel Osodeke has hinted at the possibility of the union calling off its protracted strike in a couple of days.

Osodeke gave the hint on Monday a few minutes after the academic union met with the members of the House of Representatives over the lingering industrial action.

The meeting which was held behind a closed door for about 30 minutes saw Osodeke representing the lecturers while Femi Gbajabiamila, Speaker of the House represented the leadership of the House.

It would be recalled that the House has been hosting meetings between the government and the strike lecturers in the past couple of weeks.

President Muhammadu Buhari had during his budget presentation stated that N470 billion has been allocated for tertiary institutions in the 2023 budget.

Rising from the meeting, ASUU President said the Union will sign some documents in the next couple of days which they will take to their members for ratification.

In a similar vein, Gbajabiamila said President Muhammadu Buhari will make a major announcement regarding the strike on Tuesday, October 11.

He said that both the government and ASUU had agreed to shift grounds on their respective positions in the overall interests of the students and the country at large.

He said, “This is a recap to seal the deal on what has been a long fought, long hard road for everybody both for ASUU, the students and the government. As you would recall, some weeks ago the House got involved in this crisis and we had long, tough, intense meetings with ASUU.

“We had meetings with those on the government side and we are happy to report that as the result of the consultation and intervention of the House, very significant progress has been made and we are more or less at the of the road. Save for dotting some “I”s and crossing some “T”s.

“There was one sticking issue which was the issue of no work no pay. And the President did ask that he would suggest the recommendations and would have one more meeting which we did on Friday after the budget.