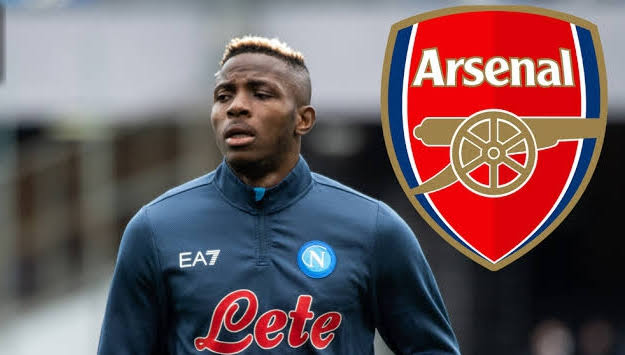 The Gunners are believed to be ready to offer Napoli €100million for the services of the Nigerian international striker.

Osimhen was in stellar form for the Partenopeans last season, scoring 18 goals in 32 appearances. And his performances have attracted some of Europe’s big boys-mainly from the Premier League.

Newcastle United, Manchester United, and Arsenal are the front runners for the 23-year-old’s signature. Nonetheless, Napoli’s price tag has been a major setback for suitors.

The Partenopeans are demanding a fee in the region of €100million-€110million. But none of Osimhen’s suitors have been willing to meet that price.

However, Arsenal could make a U-turn, as

According to London’s The Sun, the Gunners are looking to offer Napoli €100million for the Super Eagles star.

The Gunners are looking to improve on their performance of last season when they finished outside the top four, and they could splash the cash this summer, as they are also in talks with Manchester City for Gabriel Jesus.

If the deal goes through, Osimhen would become the most expensive Arsenal player ever, beating the €84million they paid for Nicolas Pepe in 2019.