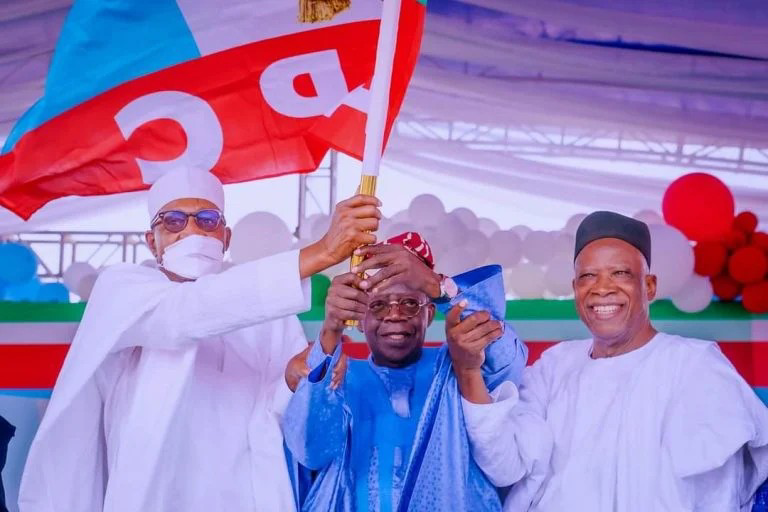 The Presidential Candidate of the All Progressives Congress (APC), Sen. Bola Tinubu, has demised fears of internal crisis in APC as a result of the just concluded presidential primary election, saying that the outcome is making the party stronger, stable, and united now than before.

Tinubu gave the assertion at the grand finale of the campaign activities of APC for the Ekiti Governorship election on Tuesday, at Ekiti Parapo Pavilion in Ado-Ekiti.

He said going by President Muhammadu Buhari-led government’s developmental strides; it will be difficult for any political party to take over governance from the party at the moment or in the nearest future.

He assured Ekiti people of more development and dividends of democracy if they vote for APC in the June 18 governorship election and the 2023 general elections.

“There is no home without a quarrel. Democracy is full of twists and thorns, hills and valleys; but we cannot burn down the house, I am not going to be a party to that. I am not only a builder but a successful builder.

“President Muhammadu Buhari has asked me to deliver a message to APC members, particularly those in Ekiti to work for the unity, stability, and progress of our dear party ahead of the 2023 elections.

“Use your Permanent Voter’s Cards (PVCs) to vote for APC governorship candidate, Mr. Biodun Oyebanji in the Saturday, June 18 election and that of the general elections.

“By this, you will continue to see progress in Ekiti and Nigeria at large that you are currently enjoying from APC-led government,” the former Lagos State governor assured.

Earlier, the National Chairman of APC, Sen. Abdullahi Adamu, called on the electorate, particularly APC members, to vote en masse for the party’s governorship candidate in the June 18 election.
Adamu said that Ekiti should vote for APC candidate, to succeed Gov. Kayode Fayemi, so that he can continue his good works and also stand for APC in all the coming elections.

The APC national chairman described the Ekiti governorship election as “a pointer election” for APC, admonishing the electorate to ensure victory for the party.

He said that “After Bola Tinubu’s election, this is our first assignment; it is our hope that you ensure APC is victorious on Saturday, June 18.”

Also speaking in the same vein, Gov. Abubakar Baguda, Chairman, Ekiti Governorship Campaign Committee, urged the electorate to do the ruling party proud by voting for its candidate in Saturday’s election.

He said: “We look forward to a successful election on Saturday, June 18. Vote Biodun Oyebanji, our party candidate to win.”