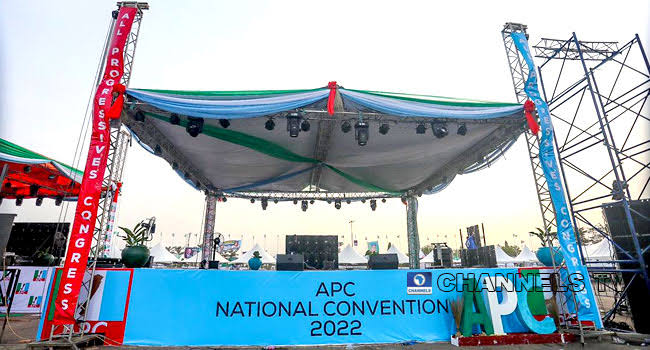 About a year and nine months after its National Working Committee (NWC) was dissolved, the stage is set for the ruling All Progressives Congress (APC) to finally hold its national convention.

The convention is scheduled to take place at the Eagle Square in the Federal Capital Territory (FCT).

In the course of today’s exercise, the APC is expected to elect a new NWC which includes a member to succeed former Governor Adams Oshiomhole as the party’s substantive national chairman.

The convention is being organised by the Caretaker Extraordinary Convention Planning Committee (CECPC) led by Governor Mai Mala Buni of Yobe State, which has since taken over the administration of the party’s affairs pending the election of a new NWC.

Governor Buni led CECPC took over the APC leadership in June 2020 after the APC National Executive Council met and resolved to dissolve the NWC based on the recommendations of the President, in a bid to resolve the crisis that hit the party at the time.

A year and five months after the dissolution of the NWC, President Muhammadu Buhari approved February 2022 for the APC to conduct its national convention, but the exercise could not take place as it was postponed.

Following the announcement of the March 26 date, the party zoned the positions of its national chairman and national secretary to the north-central and south-west regions respectively.

Meanwhile, the Peoples Democratic Party (PDP) has moved to stop the ruling party from going ahead with the convention, as scheduled.

In a suit filed at the Federal High Court in Abuja, the main opposition party is challenging APC’s governance structure, thereby asking for the convention to be declared unconstitutional.

It also wants the court to order the Independent National Electoral Commission (INEC) to de-register the APC on the ground that the party, by its entire structure, has run afoul of the constitutional stipulations for running a political party.

By a certified true copy of INEC’s list of current EXCO, according to the PDP, the APC is being run by a 13-member EXCO as against 24 required by the law.