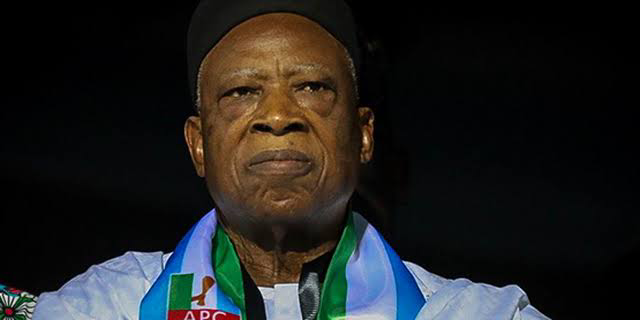 Sen. Abdullahi Adamu, late Saturday night emerged as the new National Chairman of the All Progressives Congress (APC) at the 2022 National Convention of the party, about a year and nine months after the Adams Oshiomhole led National Working Committee (NWC) was dissolved.

He was returned unopposed on Saturday at the party’s national convention held at the Eagle Square in Abuja, the nation’s capital.

Adamu, a serving member of the Senate representing Nasarawa West and former governor of the state, is President Muhammadu Buhari’s choice for the job.

Governor Abubakar Badaru of Jigawa State, who is also Chairman of the Electoral Committee, announced Adamu as the winner of the contest after he was endorsed by party members and leaders at the convention via a voice vote.

He had gone into the election as the consensus candidate following the withdrawal of his co-contenders from the contest.

Adamu replaces Oshiomhole as the substantive APC national chairman after the NWC chaired by the former was sacked in June 2020.

He, however, takes over from Governor Mai Mala Buni of Yobe State who was appointed to administer the affairs of the party pending when a convention would be conducted.

Barely a day to the convention, the coast got cleared Adamu after six aspirants from the north-central region eyeing the ruling party’s top job stepped down for him.

A letter dated March 25, 2022, and addressed to Governor Badaru, which was sighted by Channels Television, confirmed the withdrawal of the aspirants.

“May I kindly refer to the appeal by Mr President for the chairmanship aspirants of our great party to agree to a consensus arrangement wherein our colleague H.E. Sen. Abdullahi Adamu is made our consensus candidate for the chairmanship position and forward letters of withdrawal from the underlisted aspirants,” said the letter signed by Senator Akume.

Akume, presently the Minister of Special Duties, was a  frontrunner in the chairmanship race before the reported endorsement of Sen. Abdullahi Adamu by President Buhari.

Akume made the revelation in a letter addressed to the APC Election Sub-Committee, National Secretariat, Abuja

Others are: President of the Senate, Ahmed Lawan, Speaker of the House of Representatives, Femi Gbajabiamila, APC governors, former Governor of Lagos State, Bola Tinubu and other party members as well as delegates.