Any govt that can’t protect lives, property is a failure – Wike 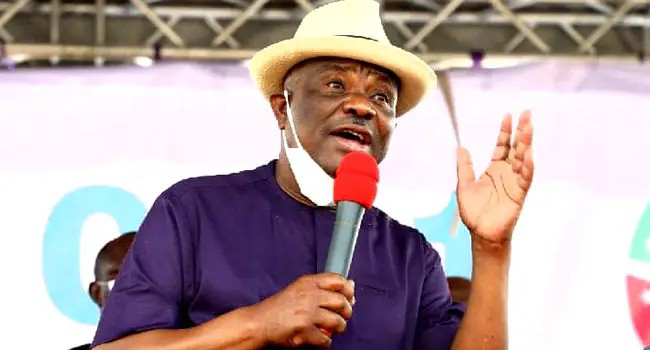 Governor Nyesom Wike of Rivers State and Peoples Democratic Party, PDP, Presidential aspirant, has said any government that cannot secure the lives and property of its citizenry has failed in its responsibility and has no business with governance.

He spoke, yesterday, at the Government House in Jalingo, Taraba State, during an interface with delegates and PDP, stakeholders

At a separate meeting in Yola, Adamawa State, where he addressed the 21 local government chairmen of the party, he said even if he did not get the party’s ticket for the 2023 election, he would work for the party.

In Jalingo, Wike noted that if he was President Muhammadu Buhari he would have resigned for failing to tackle the security challenges plaguing the country.

He said: “If I were Buhari, I would have addressed Nigerians that I’ve tried my best but my best wasn’t good enough, therefore, I’m resigning. Any government that cannot protect the lives and property of its citizens has no business still staying in government. It is unfortunate that no part of Nigeria is secure today.

“Each time there’s a bomb blast or killings, you will hear a breaking news that Buhari is meeting with service chiefs. That is wrong. The breaking news Nigerians want to hear is that bandits have been eliminated. Buhari should lead from the front by being the service chiefs himself.”

Speaking in Yola, he said: “I present myself to you to run for the president of Nigeria in 2023, if given the mandate.”

He told Adamawa State delegates to vote for the aspirant that can deliver PDP and win the presidency.

He said: “Vote for a leader that is fearless and it’s no other aspirants than Wike, though I know your Governor Ahmadu Fintiri is not with me.

“I want to assure you that I have the capacity to win, the train is moving and our party, the PDP, is moving vastly to meet the yearning and aspiration of Nigerians.”

He attributed the high level of poverty and unemployment in the country as the factors fuelling cases of insecurity, stressing that hunger does not know religious or ethnicity.

According to the governor, before now, insecurity was more pronounced in Borno and Yobe states, “But now, there is no state that does not have one form of insecurity or the other.

“Though I’m contesting with the son of the soil, your own father, I’m sure Wike is going to win and I urge you to vote for Wike and everywhere is Wike.”