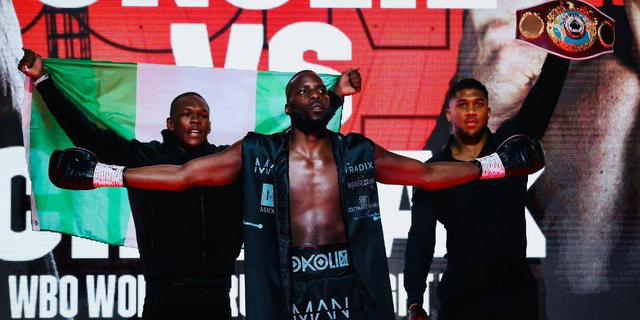 Nigerians in LONDON, Anthony Joshua and Israel Adesanya turn up with the green and white to support Okolie.

Speaking to the BBC after the fight, Okolie explained why he could not out his opponent.

He said, “It was quite a flat performance. My fitness was good but I allowed it to get messy.

“This was one of those days where it was tough, awkward, and the guy was physically strong, but I need to work on the mentality that it doesn’t need to be perfect.

“I will go back to the gym, go again and make it right the next time.”

“I will probably have one at heavyweight and then come back down (to cruiserweight) for a unification.”Israel Adesanya and Anthony Joshua both posed with the Nigerian flag Pulse Nigeria

Okolie now has 18 victories in 18 fights with 14 knockouts. The biggest buzz from the fight was the presence of Ultimate Fighting Championship (UFC) star Adesanya and former heavyweight champion Joshua.

UFC middleweight champion Adesanya came out with the Nigerian flag while Joshua held the WBO belt as Okolie walked out to the ring.

Adesanya recently defended his title against Robert Whittaker at UFC 271 while Joshua continues preparation for a rematch against Oleksandr Usyk.