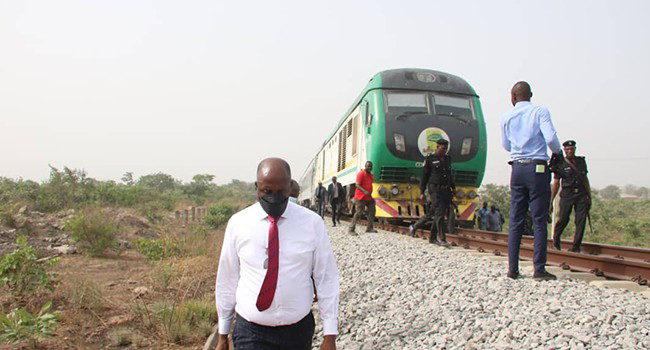 Minister of Transportation Rotimi Amaechi has called on well meaning Nigerians to support the Army in caring for hospitalised victims of the Abuja-Kaduna train attack.

Amaechi made the call when he visited victims at the 44 Nigerian Army Reference Hospital in Kaduna on Wednesday.

”The CMD and I have been talking,  the army has not charged one kobo on any patient, and they have given the maximum medical treatment that they can give to any patients.

”You saw the patients with burns and then the one that has bullet located in her heart.

”They are bringing an expert tomorrow for that one,  a cardiologist, to see if there will be surgery or not to take out the bullet.

” The rest,  they discharged,  they said they have only seven left and the rest have been discharged.

”The ministry and I think the Federal government are grateful to the Nigerian army for providing such services.

”But one thing again i have said to the Nigerian people is to liaise with the hospital management and see how much money they can contribute for the treatment of the patients.

”Obviously those drugs are not manufactured here, the experts they are bringing from outside,  doesn’t work with the army, so they definitely have to pay them.

”We will try as much as possible to see what contributions we can make to the management of the hospital to assist in taking care of the patients,” Amaechi said.

The minister said that President Muhammadu Buhari has given directive for immediate repair of the damaged track and work would commence in earnest so as to resume operations.

He expressed optimism that before the repairs would be completed,  approval would also be gotten for the purchase and possibly installation of the security equipment for the axis.

”They said they have resumed flying now and any time we are ready to travel they will have to escort the train.

”Two, the President have already approved,  even though the documents are with the Ministry of Finance, that we should employ people who will be working on the track for the next six to seven months within which we should have been able to install the equipment.

”So we intend to employ villagers that will be working on the track, if they see any thing they suspect they should let us know so that we can let the security know.

”All these are measures we will take until we install the security equipment.”

The minister further said that the Directorate of State Security Service would be involved in recruiting the villagers to ensure that those recruited were not informants to terrorists.

The Chief Medical Director of the hospital,  Col. Steven Onuchukwu, said most of the clients received were all currently stable.

According to Onuchukwu, the discharged patients will be followed up by the management to ensure their psychological state is restored.

”None of the case is beyond us.  Because we also have collaborations with our sister agencies,  the teaching hospitals.