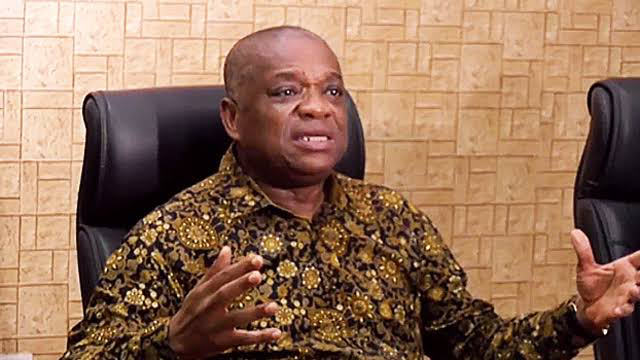 The Economic and Financial Crimes Commission (EFCC) has asked a Federal High Court in Abuja to transfer the fresh trial of former governor of Abia State, Senator Orji Uzor Kalu, and two others in an alleged 7.1 billion naira fraud to its Lagos division.

The motion on notice, which seeks the transfer was brought pursuant to sections 18, 19, 22 and 45 of the Federal High Court Act 2010 and section 93 of the Administration of Criminal Justice Act, 2015 is praying for an order of the Court in Abuja, transferring the case with charge number FHC/ABJ/CR/56/2007 between the Federal Republic of Nigeria and Orji Uzor Kalu and two others to the Lagos division of the court.

Oluwaleke Atolagbe, counsel to EFCC said on Thursday that, the motion was predicated on five grounds among which are that the Abuja division of the Federal High Court lacked the requisite territorial jurisdiction to entertain and try the defendants in the instant charge.

Another ground for seeking transfer of the trial was that the charge was preferred against Orji Uzor Kalu, Slok Nigeria Limited and Ude Jones Udeogu at the Federal High Court Abuja sometime in number 2007 by the EFCC, following an investigation by the commission.

The motion further indicated that after taking their plea, the defendant brought an application challenging the competence of the charge and contending that there was no prima facie case against them.

It was also contended that following the decision of the Supreme Court that many of the ingredients of the offences against them occurred in Lagos and even most of the witnesses, who are bank workers reside in Lagos, the EFCC applied to the Chief Judge of the Federal High Court to transfer the matter to Lagos.

Satisfied that many of the ingredients of the offences occurred in Lagos, the Chief Judge transferred the case to the Lagos division of the court where the defendants were prosecuted and judgment delivered in the matter.

He, therefore, asked Justice Inyang Ekwo to issue an order transferring the trial to Lagos in compliance with the Supreme Court order.

When the matter came on Thursday, the Judge said that he would not be able to take the application in view of the approaching Easter holidays and consequently fixed May 17, 2022, for determination of the application.

PREVIOUS POST Osun guber primary: PDP issues certificate of return to Ademola Adeleke 
NEXT POST Rus­sia: We have enough oil and gas buy­ers even with sanc­tions