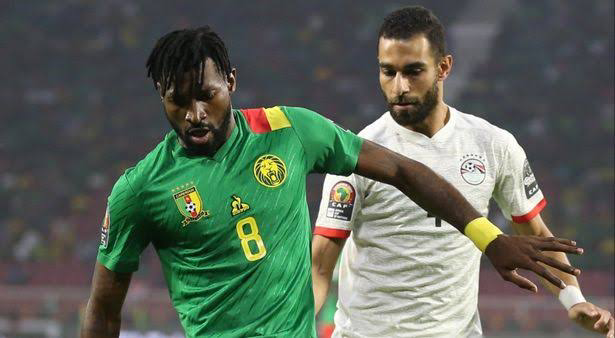 Algeria’s soccer federation, the FAF, has requested that the second leg of their World Cup qualifying playoff against Cameroon be replayed.

The north Africans were eliminated on away goals after a 2-1 defeat after extra time in Blida on Tuesday, with Cameroon forward Karl Toko Ekambi scoring the winner in the 124th minute.

The request, which will almost certainly be flatly ignored by FIFA, is based upon complaints about refereeing decisions.

Cameroon beat Algeria courtesy of the away goals rule after Karl Toko Ekambi scored in the fourth minute of added time in extra time to secure a 2-1 win on Tuesday.

That win in Blida came four days after Algeria had won the first leg 1-0 in Douala.Islam Slimani scored Algeria’s goal in the first leg, but it was his two disallowed goals in the return match which fueled the FAF’s fury.

Slimani had a goal correctly ruled out for offside in the second half.The former Leicester City striker then had the ball in the net again in the first half of extra time, but this goal was disallowed for handball after a VAR review.Had either of those goals stood Algeria would have led 2-1 on aggregate.

Ahmed Touba did put Algeria 2-1 up on aggregate in extra time when he struck in the 118th minute.But Algerian celebrations were cut short when Ekambi hit Cameroon’s winner with the last meaningful kick of the game.

Two days later a statement published on the FAF website read: “The Algerian Football Federation has lodged an appeal with FIFA against the scandalous arbitration which distorted the result of the Algeria-Cameroon playoff return match played on March 29, 2022 at the Mustapha Tchaker Stadium in Blida.

“The FAF is determined to use all legally permitted means to have its rights restored and to replay the match under conditions guaranteeing the honesty and impartiality of the arbitration.

“The FAF also requests the opening of an investigation by FIFA bodies to shed light on the arbitration of the Algeria-Cameroon match.”

Cameroon will be in Pot 4 in Friday’s World Cup draw along with Ghana.The other three African qualifiers – Senegal, Morocco and Tunisia – are all in Pot 3.