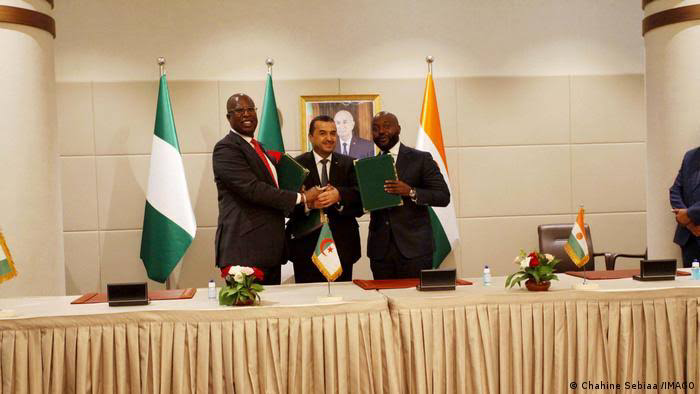 To move away from relying on Russian energy, the European Union are increasingly turning to Africa for natural gas imports — and Algeria, Niger and Nigeria are looking to cash in.

Algeria, Niger and Nigeria signed a memorandum of understanding on Thursday to build a 4,000-kilometer (2,500-mile) Trans-Saharan Gas Pipeline.

The three countries agreed in June to revive decades-old talks over the project, a potential opportunity for Europe to diversify its gas sources

It is estimated that, once the $13 billion (€12.75 billion) pipeline is complete, it will transport up to 30 billion cubic meters (1 trillion cubic feet) of gas annually from Nigeria, in West Africa, north through Niger and on to Algeria.

From there, it could be pumped through the undersea

The Trans-Saharan Gas-Pipeline (TSGP), should send billions of cubic meters of Nigerian gas to Algeria via Niger. Algeria will then send it to the countries of the European the gas, via the Transmed which connects the country to Italy through Tunisia, and LNG (liquefied natural gas) transported by tankers.

The Algerian Minister of Energy and Mines, Mohamed Arkab, and his counterparts from Nigeria, Timipre Sylva, and Niger, Mahamane Sani Mahamadou, co-signed the memorandum of understanding in Algiers during a 3rd tripartite meeting. They first discussed aspects of the project including the status of progress, according to APS. For the moment, no indication has been given as to when the project will be completed.

When the project was launched in 2009, the investment cost of the Trans-Saharan Gas-Pipeline (TSGP) was estimated at 10 billion dollars. The pipeline spanning 4,128 km of which 1,037 km are in Nigeria, 841 km in Niger and 2,310 km in Algeria, will connect the gas fields of Nigeria, through Niger, to the Algerian border to connect to the Algerian network.

The TSGP will also allow on its way the supply of the regions of the Sahel countries. This project has been reactivated in a geopolitical context marked by strong international demand for gas and oil and a surge in prices, after the war in Ukraine erupted late February.

The North African country, whose proven natural gas reserves amount to nearly 2,400 billion m3, supplied around 11% of the gas consumed in Europe before the war in Ukraine, compared with 47% for Russia. It is the first African exporter of natural gas and the 7th in the world.