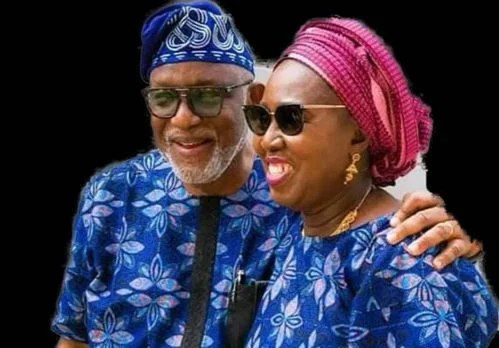 The Governor of Ondo State, Rotimi Akeredolu, SAN, has backed his wife, Betty Akeredolu, and her bid for a seat in the Senate.

He said his wife, whom he described as a workaholic, gender and human rights activist, humanist and philanthropist, will be representing her people in her State of birth, Imo.

Akeredolu made this known in a statement he personally signed on their 41st wedding anniversary.

“Betty, FLOOS, let me choose this great day in our lives, our 41st wedding Anniversary to notch up in print my support for your popular and known quest to serve your people in the Senate,” he said.

He continued, “I join all other well-wishers, admirers, supporters and stakeholders to support, openly and without any reservations or equivocation, my Adorable Betty in her bid to continue to serve the people in her State of birth, Imo.

“I do this, most enthusiastically, as a partner, admirer and active follower for over four decades. I consider myself highly privileged to have a workaholic, gender and human rights activist, humanist and philanthropist as wife, adviser, harshest critic, supporter, political associate, and, above all, an unrelenting ideologue, ready to sacrifice and confront any obstacle, natural and artificial. I am of the firm belief that any group, society, community, state, or country, privileged to avail itself of the quintessential service of a bold crusader, as she, is lucky indeed.

“Seeking to continue what she started long before I came into politics, when she ran for the House of Representative, at the Upper Chamber of the National Assembly, is not strange to me or anyone who has been watching the activities of this special personality. I SUPPORT HER ASPIRATION NOW, AS I HAVE ALWAYS DONE, EVEN BEFORE I JOINED POLITICS. I know her to be a passionate believer in rectitude. I believe in her mission to emancipate women from the shackles of all forms of oppression.

“I have known her as a fiercely independent personality who is never afraid to voice her dissent on any issue. I have witnessed her triumphs over adversities at close quarters. She made me appreciate more the nuanced difference between foolhardiness and courage. Many have come to accept her as a rock of refuge for the oppressed and hopeless. She has been a strong advocate for equity and justice and against unprofitable superstitions, beliefs and habits which predispose people to diseases and avoidable deaths.

“I am proud of this gift from Imo State. I support her aspiration wholeheartedly. I am convinced that the people of Imo State will enjoy quality representation from her. Her presence in the Senate promises exciting moments.

“I harbour no anxiety that my Adorable Betty, ADA OWERE, has all it takes to be more. While offering her my unalloyed support, I wish her all the best in this current quest to extend and particularise the scope of service in the interest of the people.

“May the will of the Almighty be manifested and fulfilled in this endeavour, and many more, designed to uplift the downtrodden. May fair winds aid this sail