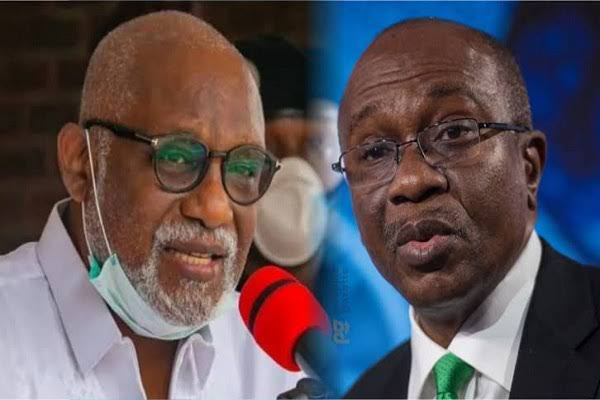 Rotimi Akeredolu of Ondo State has asked the Central Bank of Nigeria (CBN) Governor Godwin Emefiele to resign over the latter’s move to join the 2023 presidential race.

The Ondo governor’s comment came hours after a group of supporters purchased the All Progressives Congress (APC) presidential nomination form for Emefiele.

In a statement on Friday night, Akeredolu argued that Emefiele cannot combine his work with partisan politics.

“Consequently, we admonish Mr Emefiele to leave the office, immediately, for him to pursue his interest,” he said.

“He cannot combine partisan politics with the very delicate assignment of his office. Should he refuse to quit, it becomes incumbent on the President and Commander-in-Chief of the Armed Forces to remove him forthwith.”

The governor said before the purchase of the form, Emefiele had been linked with partisan politics.

“The audacious moves by those who claimed to be supporting this interest have been unsettling.”

He said while the CBN governor is constitutionally qualified to belong to any group, Emefiele’s position makes the recent move “brazen”.

“There is no gain asserting the obvious. The combined effect of the Public Service Rules, CBN Act, and the 1999 Constitution, as amended, exposes not only the oddity inherent in this brash exercise of presumed right to associate,” the governor added.

The Section 9 of the CBN Act, 2007, which governs the operation of the bank and regulates its officials’ conduct, the CBN governor must not venture into any other vocation while in office and must resign in writing to the President if he nursed such intention.

It read, “The Governor and the Deputy Governors shall devote the whole of their time to the service of the bank and while holding office shall not engage in any full or part-time employment or vocation whether remunerated or not except such personal or charitable causes as may be determined by the Board and which do not conflict with or detract from their full-time duties…”