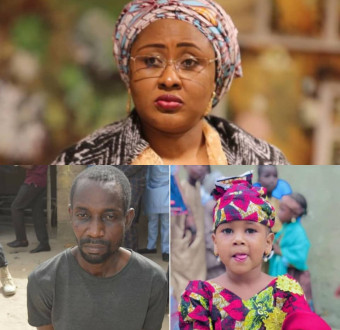 Tanko, who is proprietor of Noble Kids Comprehensive College, Kwanan Dakata in Kano has confessed to kidnapping and subsequently the killing of the minor with a rat poison.

The First Lady took to her verified Instagram page, to express support for a call by a popular Kano-based Islamic cleric, Mallam Abdalla Gadon Kaya, who called for Tanko’s public execution.

“We are behind mallam’s stance”, Aisha Buhari wrote.

Gadon Kaya further that Tanko’s life not better than that of the minor, as such he should be executed publicly.

Also private school proprietors have called for the prosecution of their killer colleague.

There has been widespread outrage over Hanifa’s murder, with #JusticeForHanifa trending on the social media for days.

Hanifa Abubakar was kidnapped on December 4, 2021, and murdered two weeks later; her body was dismembered and buried on her former school’s premises.

Tanko was arrested by the police while trying to collect the N6million ransom he demanded from little Hanifa’s parents.