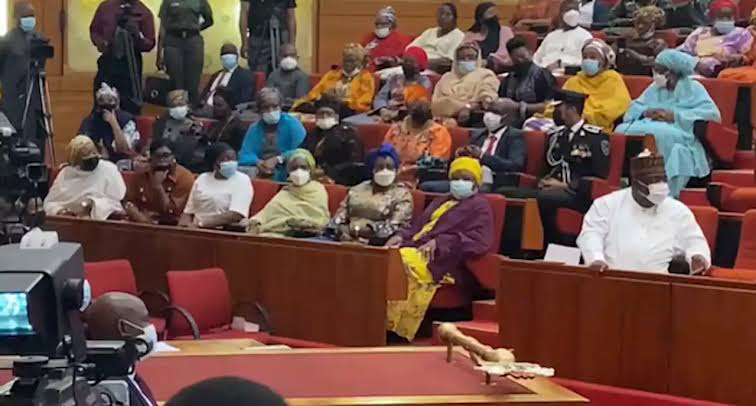 The First Lady, Mrs Aisha Buhari, on Wednesday attended the plenary sessions in both chambers of the Senate and the House of Representatives.

Mrs Buhari was at the National Assembly to throw her weight behind an item for amendment in the 1999 Constitution which seeks specific seats to be created for female legislators in the country.

The Senate President, Ahmad Lawan, in a short remark after the report was laid by Deputy Senate President, Ovie Omo-Agege said the visit by the First Lady was to show support for a bill to have more female parliamentarians at the federal and state legislatures.

“The First Lady’s visit is to show support for a bill for more female parliamentarians in both chambers in the Senate and the House and the State Legislatures.

“This, we believe, will help in nation building as such significant participation by our women will add value to not only legislation but the much desired and needed national development.

“For us as a nation, our motto is Unity and Faith, Peace and Progress. We believe that all hands must be on deck to ensure the participation of each and every segment of our society,” Lawan said.

The Senate President assured the First Lady that Ninth Assembly while voting on the amendments to the constitution as contained in the ad-hoc committee’s report, would ensure that women participation in governance is commensurate with their population.

Also at the House of Representatives, Mrs Buhari was admitted into the chamber alongside the ministers to witness the laying of the constitution amendment bills.

Speaker Femi Gbajabiamila announced to the House that the First Lady was in plenary to show support for women, in certain areas of the Constitution amendment which would benefit women.

The arrival of the First Lady at the Green Chamber was also announced via Twitter on the official handle of the House of Representatives.