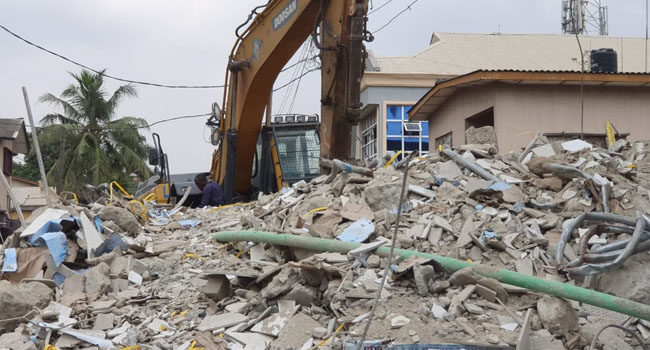 A two-storey building has collapsed in the Palm Grove area of Lagos State, authorities said on Wednesday.

The affected building said to have been abandoned is located at No 15, Oke Arin Street, Ilupeju Palm Grove.

Confirming the incident in a statement, the Lagos State Emergency Management Agency (LASEMA) said the structure collapsed to ground zero in the early hours of the day.

It explained that no life was lost to the incident, although one man was injured, adding that the building had been cordoned off.

“Further investigation revealed that the incident occurred at about 12:45 am due to aging of the structure,” LASEMA said in the situation report. “Fortunately, no loss of life.

“However, one adult male sustained a minor injury and has been taken to the hospital. The affected building has been cordoned off in order to prevent any threat. Operation (has been) concluded and Cobra team heading back to base.”

Wednesday’s incident is the latest in the chains of building collapses recorded in Lagos as the government works to stop the trend.

A high-rise block of luxury flats under construction had collapsed in November last year in the Ikoyi area of the state, killing at least 40 people.

Three months later, in February, another building under construction collapsed in the Yaba area of the state, trapping some workers.

While LASEMA said the structure was already in violation of the state’s safety protocols, it stated that the building had been captured by the LASBCA District Office and served with all statutory notices, sealed at the district and central enforcement levels.

Despite this, it said the developer of the building had continued clandestine operations mostly at night and at the weekends.