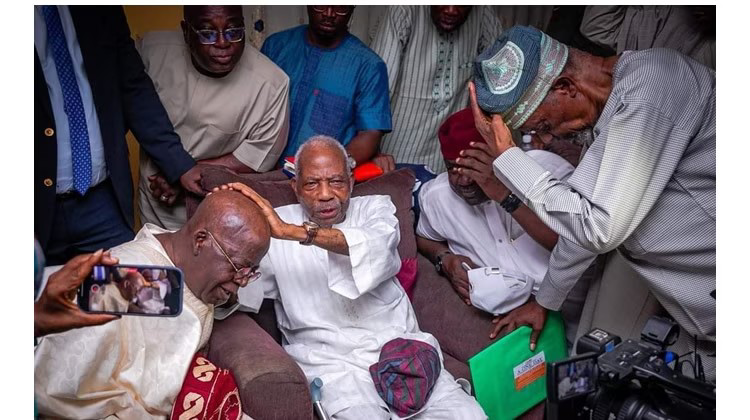 Leaders of the Pan Socio-Political Group, Afenifere have endorsed the Presidential candidate of the All Progressive Congress, Asiwaju Bola Tinubu.

Tinubu had visited the national leader of the group, Pa Reuben Fasoranti and other leaders of the group at his country home in Akure, the Ondo state capital.

Present at the meeting includes leaders of groups from the six South West State including Kwara and Kogi.

He visited the leader of the group to present the 80-page Action Plan document on how he intends to tackle the economic and other problems the country is grappling with.

Speaking during the visit, Fasoranti, said that Tinubu had earlier asked for his blessings in April this year, but he informed him to first get the party’s ticket before coming for his blessings

According to him” l am happy that you’re here today after getting your party’s presidential ticket.

Fasoranti thereafter prayed that the candidate will win the election and that he would be alive to witness his inauguration in May of next year.

Speaking later during a reception for the candidate,  Pa Fasoranti, described Tinubu as not only a Yoruba man but a complete Nigerian.

Fasoranti was optimistic that the candidate would replicate and do even more than he did when he held sway as the Lagos state governor.

Speaking through, the former Secretary General of the group Basorun Sehinde Arogbofa, charged Tinubu to be a leader that will unite Nigeria and work for the progress and development of the country.

“You are not just a Yoruba man but a Nigerian. When you become President take Nigeria into consideration in all you do but never forget home. Our demands are what you know already.

” Restructuring, security and fixing the economy. Our country is no longer safe. We want state police so that the country will be safe.”.

He said that the leaders ” are in no doubt that Asiwaju Ahmed Bola Tinubu as President of the Federal Republic of Nigeria offers the best opportunity to produce a government of that will usher in a new Era of hope, peace, security, harmony, gainful employment for the multitude, economic development, social and political stability.

“Don’t let us have any regret supporting you when you get there.

Also speaking, the former Secretary of the Government of the Federation, Chief Olu Falae, charged Tinubu ” to work to fix the economy.

Chief Falae decried the falling value of the Naira, adding that he used all his life to serve Nigeria and in his old age he does not want all he used his life for to be wasted.

According to him “When you become President please work to fix this country. We are here to offer advice. I am old and no longer looking for a job. We need to fix security, and fix our economy.

“Our naira is almost becoming useless and will soon become N1000 to a dollar.

” We must change that. I know your ability. We will always be here to support and I wish you well. We will be here when you bring the trophy home by the grace of God.

“Asiwaju has the reach, the competence to lead Nigeria,” the Deputy Governor said.

In his remark, Ekiti State Governor Biodun Oyebanji assured the Yoruba leaders that all the governors of South West and Ekiti people are solidly behind Tinubu.

“We are happy to receive our leader, Asiwaju Tinubu, today. I want to assure him and our fathers that we will support him to the end.

The governor of the opposition People’s Democratic Party in Oyo state, Seyi Makinde, who spoke through his deputy, Bayo Lawal, said though they don’t belong to the same party that Pa Fasoranti invited governor Makinde to the ceremony.

Lawal said that the administration of governor Makinde supports any discussion on Yoruba and at home with the stance of the group.

He was however, not categorical that his governor has also endorsed Tinubu’s presidency.

Lawal added that ” My governor doesn’t joke with Yoruba matter, even though, we are not united by the party, but region united us and everything discussed on Yoruba, he would support.

In his response, Tinubu who didn’t respond to the group’s call for restructuring and state police spoke on the intrigues that characterised his emergence as the party’s candidate.

He said that President Muhammadu Buhari, governors of parties from the North and other Northern leaders have proved to him that Nigeria can survive its unity and other challenges.

Tinubu said he had come to fulfil his promise that he would come back to visit Pa Fasoranti after winning the party’s ticket and asked him and other Yoruba leaders to help him thank President Buhari and Northern Governors for their steadfastness and for being promise-keepers.

According to him “The North proved to me Nigeria can survive its unity. Some people want President Muhammadu Buhari to announce someone but the President said No.

“He insisted the process must go on democratically. The President said anyone that would mess up the APC process would see the other side of his eyes. He remained upright and saw to the process to the end.

“Northern APC Governors resolved that the Presidency must go to the South and especially South West. Governor Nasir El-Rufai, Abdullahi Ganduje and others supported me to the end.

” The battle was tough and at a point, I was in doubt. There were many rumours and I became confused about what to believe.”

“President Buhari told me I promoted his name with the way I won the primary election because the process was clean and transparent and nobody can accuse him of manipulating the process. President Buhari said I gave him credibility and I deserved to be President.

“When I asked him to nominate the VP candidate for me, he said I should pick whoever I want and it is the reason I chose a competent man in Kashim Shettima who never lost any election and protected Christians in time of trouble in his state.”