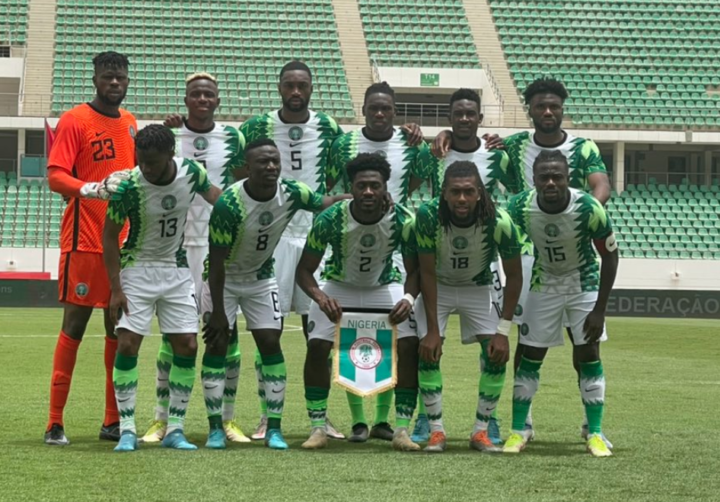 The Super Eagles of Nigeria have recorded their biggest win ever after thrashing Sao Tome & Principe 10-0 in their Group A clash of the Africa Cup of Nations (AFCON) qualifiers.

The annihilation took place at the Adrar Stadium on Monday.

Napoli striker Victor Osimhen opened the floodgates within minutes when he scored the first goal from Moses Simon’s cross.

Simon, who plies his trade with Nantes in France, registered his name on the scoresheet to make it 2-0 for Nigeria.

A few minutes to the end of the first half, former Kortrijk forward Terem Moffi profited from Osimhen’s assist to open his international goal diary.

In the 48th minute, Osimhen continued the onslaught after he benefited from Ademola Lookman’s excellent delivery.

A fantastic free-kick from Oghenekaro Etebo at the edge of the box made it 5-0 for the Super Eagles five minutes before the hour mark.

Moffi then bagged his brace and Nigeria’s 6th from a fine Zaidu Sanusi assist before Lookman joined the train for his maiden international goal in the 64th minute.

In the 65th minute, Super Eagles poser boy Osimhen got his hat-trick before securing his fourth goal of the match — moments later — as Nigeria led 9-0.

The last time Nigeria secured a huge victory was in 1991 against Burkina Faso in the AFCON group stage.

They won the encounter 7-1.