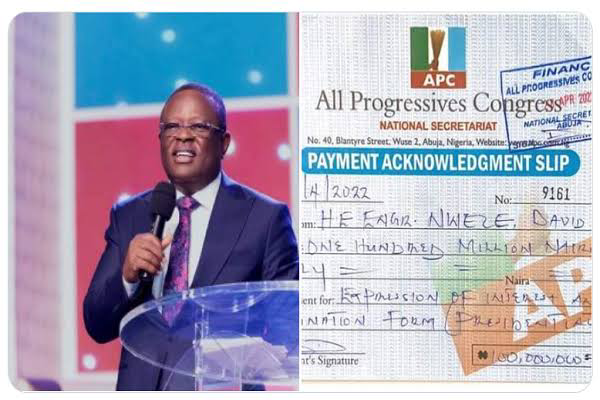 Ebonyi State Governor, David Umahi, on Thursday, picked the nomination and expression of interest forms to contest the presidential election in 2023, on the platform of the ruling-All Progressive Congress.

This puts to rest the insinuations recently within Ebonyi and beyond that the governor had jettisoned his presidential ambition for the Ebonyi South Senatorial zone contest.

Rivers State Governor Nyesom Wike, last week, challenged Umahi to contest the presidential election, if he was a man.

Umahi announced this in a post, on Thursday night, on his verified social media handles.

The governor also displayed the receipt of the N100,000,000 form which is for both the expression of interest and nomination forms

The PUNCH reports that Umahi joined the APC on November 2020 from the Peoples Democratic Party, the party, on whose platform he won two governorship elections.

He had previously been a deputy governor and Chairman of the PDP in the state.

The governor in the post announcing the purchase of the form, urged Nigerians to support him.

He said he would replicate the prudent management of the state’s resources which enabled him to transform the state to the administration of the country if elected as president.

He said, “Nigerians, I will not disappoint you.

“With the meagre resources at our disposal in Ebonyi State, we were able to transform the state from the dust of the Nation to the Dubai of Nigeria.

“We can do even better in Nigeria and with your support, we shall achieve it. Nomination forms.”

His Media Aide, Nwaze Francis, also confirmed the development in a statement.

Nwaze said, “The Governor of Ebonyi State, and All Progressives Congress Presidential Aspirant Engr David Umahi, has purchased his Expression of Interest and Nomination forms to contest for the office of the President of the Federal Republic of Nigeria”.https://83d23bf68b185381fa78a649c9197eb7.safeframe.googlesyndication.com/safeframe/1-0-38/html/container.html?n=0

“Nigerians, the time is now. Let all hands be on deck to ensure that Governor David Umahi gets the APC ticket.

“He is the man that the cap fits and he has ticked all positive boxes right. The time is now.”