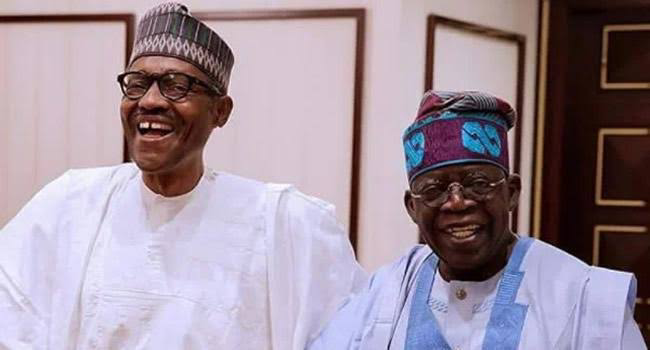 The presidential candidate of the All Progressives Congress (APC), Senator Bola Tinubu has commended President Muhammadu Buhari for his resolve to support the candidates of the party vying for various political offices in the 2023 elections.

Tinubu spoke at the weekend when he received the party’s National Chairman, Senator Abdullahi Adamu, and other members of the National Working Committee (NWC) at the Tinubu/Shettima Campaign Office in Abuja.

Tinubu in a statement issued yesterday by his Media Office and signed by Mr. Tunde Rahman commended Buhari for his loyalty and commitment to the party.Responding to Buhari’s resolve not to support any other candidates except those being sponsored by APC, Tinubu said the President deserves commendation for being a true leader and loyal party man.

He said: “I like the statement of Mr. President a few days ago – firm, concise, straight to the point, and bold as a leader of our party. We should commend the President for that statement; for his commitment and loyalty to the party; and for being a true party leader.”

“We will institute 21st-century financial reforms, embark on 21st-century infrastructural development and 21st-century elimination of crimes that will be technology-driven.”On his part, the APC National Chairman commended Tinubu for the efforts made and structures erected to ensure an effective campaign.According to him, “You’re already writing the word success with these laudable efforts.  Those who know you expect no less. And it is our hope and prayer that God Almighty crown our efforts with victory in February 2023.”