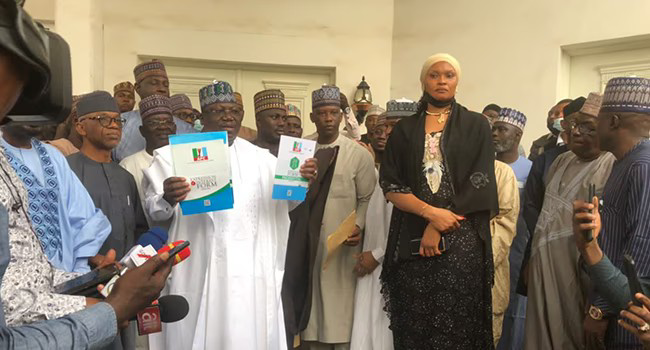 Speculations that the North is unwilling to relinquish power in 2023 may have been confirmed by the entry of Senate President, Ahmad Lawan, into the 2023 presidential race.

Some political associates of Senate President, Ahmad Lawan, have picked the All Progressives Congress, APC, Presidential Nomination and Expression of Interest forms for him, saying Nigeria needs a “Nigerian president” and not one given to ethnic proclivities.

They said they have Dr Lawan’s backing to pick the forms on his behalf.

“We are not here on our own, we have his backing. Even though friends and brothers contributed to purchase this form for him but he has given us the go ahead”, said leader of the group, Chief Sam Nkire.

Lawan officially joined a growing list of aspirants who are running for president on the platform of the All Progressives Congress (APC) on Monday.

The Senate President received the presidential nomination and expression of interest forms said to have been purchased for him by a group of supporters in Abuja.

With Lawan joining the race, no fewer than 26 aspirants would be jostling for the ruling party’s presidential ticket at its primary election scheduled to take place from May 30 to June 1, 2022.