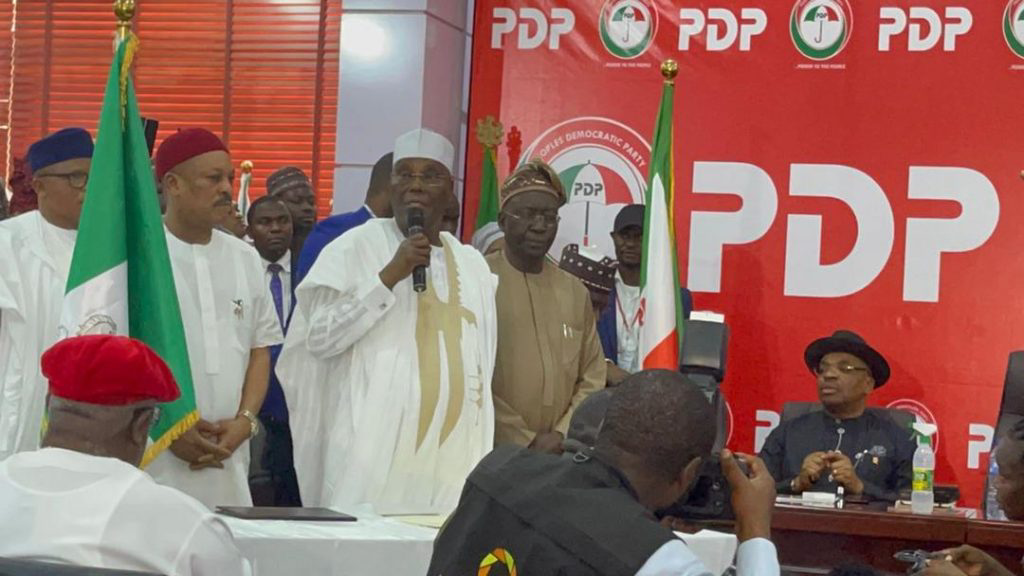 Atiku Abubakar has received his certificate of return as the presidential candidate of the Peoples Democratic Party (PDP), calling on party members to work together in their mission to rescue Nigeria from the “misrule” of the All Progressives Congress (APC).

The former vice president said this on Wednesday at the headquarters of the PDP in Abuja, stating that the party must begin work without delay.

“And it requires the entire PDP family and other supporters and sympathizers. We must pull everyone together. Nobody should be excluded. I have already visited some of those who contested against me as a way to lead in that effort to unify the party so that we can face our real opponents, defeat them in the elections and begin the process of rescuing and rebuilding this country,” he said according to a statement issued by his media office.

“The callous and dangerous APC misrule over the past seven years is there for everyone to see. However, we should not take their defeat for granted. We must unite and work extremely hard for every single vote in this country. There is so much to do and there is little time to waste. So, let’s get to work.”

The former vice president thanked the organising committee for a successful convention, lauding his supporters and those who worked with him to achieve his most recent feat.

“I am particularly grateful that you kept your word and gave us contestants fair treatment despite your likely varying sympathies and what must have been a pressure-laden and difficult situation,” the PDP chieftain said about the committee.

“Your integrity and even-handedness must be commended. I commend our party’s National Executive Committee for putting our party and our country first in its deliberations and decision-making.

“I thank all those who assisted my campaign in a variety of ways to enable me to crisscross this vast country and make my case to our delegates and other party elders and members.”

The presentation of the certificate comes a few days after Atiku clinched the party’s ticket for the presidency, beating several contenders including Governor Nyesom Wike of Rivers State.

In his victory speech, Atiku promised to unite Nigerians and give every part of the country a sense of belonging.

“I pledge to unify this country,” he said in his victory speech. “That’s why I refer to myself as a unifier.

“The reason why I feel that unity is important is because APC has disunited Nigerians completely. I will work to restore unity and bring a sense of belonging to all Nigerians.”