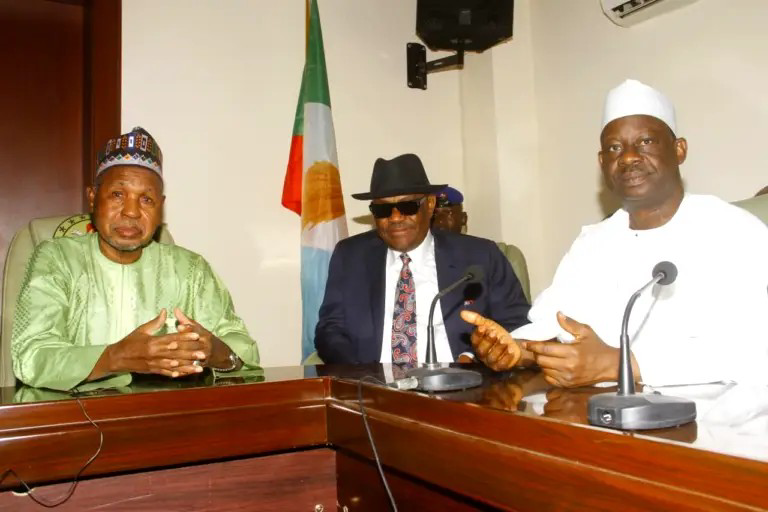 The Executive Governor of Rivers State and Presidential aspirant in the forthcoming 2023 General Elections, Nyesom Wike on Tuesday visited Governor Aminu Masari of Katsina State and PDP delegates in the state to seek their support.

His visit is coming ahead of the PDP National convention scheduled to hold on May 28 and 29, 2022.

On arrival at the General Muhammadu Buhari Government House, Katsina, Governor Wike said the visit was to formally inform and seek Governor Masari’s support in line with his intention to run for the Office of the President of Nigeria come 2023.

Governor Aminu Bello Masari of Katsina State has commended his counterpart from Rivers State, Governor Nyesom Wike for his commitment to the unity of Nigeria, noting particularly how he frustrated the Independent People of Biafra (IPOB) from infiltrating Rivers State.

Masari who expressed joy to see the likes of Wike aspiring to lead the country says that it is a sign that the country is becoming united as one.

In his words: “It is gratifying to God to see people like you from Rivers State too aspiring to be president. That shows that the country is becoming one united country.

“I personally want to appreciate your role during the most difficult days of IPOB. I know what you did as a committed Nigerian. If you had allowed the situation to penetrate Rivers, only God knows where the situation would have been today

Masari further said he feels personally obliged to anybody from Rivers State considering the 100% support he received from the state during his days as Speaker of the House of Representatives.

“If there’s any one state that I can count on for 100% support during my days as speaker in the House of Representatives, it was Rivers State and we remain friendly upto this moment,” Masari said.

As a result anybody coming from Rivers State to wherever I am is welcome into my personal house or official residence.”

Masari urged political actors in the country to avoid doing anything that will injure or endanger the processes because it may consume all of us.”

Speaking earlier, Rivers State Governor, Wike Nyesom said he was in Katsina State to consult with party delegates who will be electing the party’s flag-bearer in the forthcoming national convention of the People’s Democratic Party PDP later this month.

Wike said: “I am here to formally inform you that I am making myself available to run for the office of the president of Nigeria and I am here today to talk to the delegates who will make it possible on 28 and 29 of this month which is our national convention.”

Wike said as a tradition and as a friend to the Katsina Governor, he deems it very important that he pays him homage to congratulate him for completing the holy month of Ramadan in peace and also to thank thank him for what he is doing for the people of Katsina State.