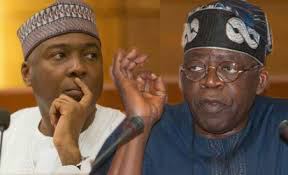 One of the presidential aspirants on the platform of the People’s Democratic Party (PDP) and former Senate President, Bukola Saraki has said he acted in the national interest when he opposed a plan to foist a Muslim-Muslim presidency on Nigeria in 2014.

Saraki stated this while reacting to the comment made by the National Leader of the All Progressives Congress (APC), Asiwaju Bola Tinubu on Thursday in Ogun State that he led a campaign of calumny against his emergence as the running mate of Muhammadu Buhari in the 2015 presidential election.

Speaking in a statement issued by the head of his Media Office, Yusuph Olaniyonu, Saraki said he believed Nigeria was bigger than anybody’s ambition, including that of Tinubu, reiterating that he would oppose any plan that causes a religious crisis in a multi-religious country like Nigeria.

He said, “The opposition to a Muslim- Muslim ticket was not targeted at Tinubu or any other person. It was a decision that even all party leaders know helped the victory of the party and also worked for the unity of the country.

“That decision is not about self but national and collective interests. It is a decision which served the purpose of the people of Nigeria and I have no regret supporting it.”

While expressing surprise that Tinubu refused to move on and still sulked over what happened in 2014, the former Governor of Kwara State said that Tinubu had become so fixated on the Muslim-Muslim ticket issue of 2014 that he worked so hard to stop his emergence as Senate President in a move he considered as retaliatory.

The statement reads, “Tinubu’s speech in Abeokuta did not demonstrate any disrespect to President Buhari, for whom he has a very high regard, and whose re-election campaign he chaired in 2019.”

“In his (Tinubu) effort to convince the party delegates to vote for him at the primaries, he went down memory lane to provide specific instances when he brought his political clout and strategic skills to assist individuals, groups and tendencies in the party to gain political power.

“These factual references are already in the public realm. They have been reported and analysed in the media in the last eight years.”