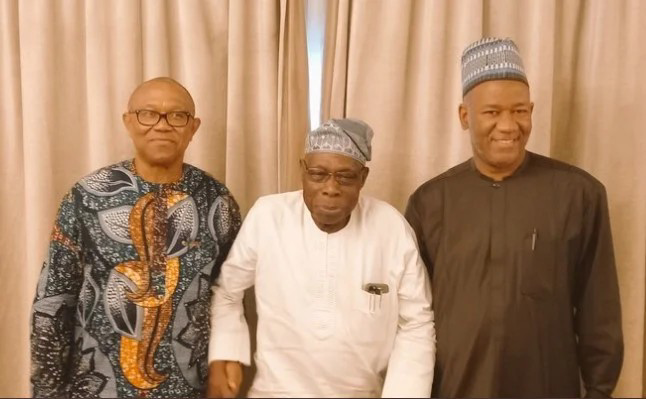 The vice presidential candidate disclosed this on his Twitter handle and also shared pictures from the meeting.

The visit may not be unconnected to the candidates’ move to gain wider acceptance and necessary stakeholders’ support for their ambition through nationwide consultation.

“Earlier today, myself and H. E. #PeterObi in company of other #NgLabour chieftains consulted with the former President, Olusegun Obasanjo,” he captioned the pictures.

The PUNCH reports that Obi, who is a former Anambra State governor, on July 8, 2022, unveiled Baba-Ahmed as his running mate in Abuja.

The PUNCH reports that Obi, who is a former Anambra State governor unveiled Baba-Ahmed as his running mate in Abuja on Friday.

Baba-Ahmed is the founder of Baze University, Abuja. The 46-year-old was a former lawmaker who represented Kaduna North Senatorial district.

Speaking at the ceremony, Obi said the unveiling signals the party and his resolve in the journey to “take back Nigeria”.

“It is good to be here today after weeks and months that we have gone round, consulted and searched around to look for somebody who fits the bill of what we are trying to do.

“Today, I am proud to say I have been able to meet and secure somebody who is eminently qualified and fits the bill to be the Vice President of Nigeria.

“I know people will say you are not there yet, but I can tell you, I know where we are going,” Obi said.

Continuing, he said, “This is our right to secure, unite and make Nigeria productive. And you can’t do that without having people who have similar visions, ideas and are prepared for the task. So, I have the honour today to present to you, God willing, Nigeria’s next Vice President in the person of Senator Yusuf Datti Baba-Ahmed.

On his part, Baba-Ahmed said his decision to accept the nomination was borne out of his commitment to rescuing Nigeria.

He also said Obi and other Labour party stakeholders also played a major role in his decision as he buy into their agenda and movement of getting Nigeria to where it should be.

He said, “My task here today is simple and it is to accept my nomination but just before I do that, I should give justifications as follows.

“The undeniable and unchallengeable fundamental reason for being on this ticket is to rescue Nigeria.

“The second reason is that I believe in the greatness of Nigeria. I believe there will be peace and prosperity, and I believe Nigeria people will unite.”