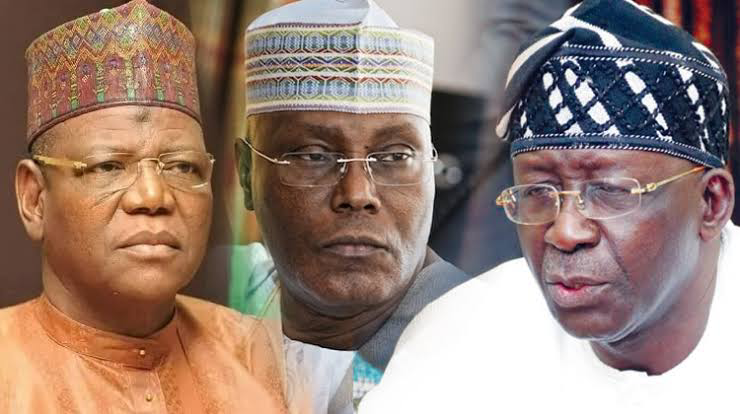 Atiku, Tambuwal, Lamido, and Hayatu-Deen, who are all PDP presidential aspirants, have also denounced the report of Prof. Ango Abdullahi, which endorsed Saraki and Mohammed as the North’s consensus presidential candidates with the backing of a former military President, Gen. Ibrahim Babangida (rtd).

This is coming as the PDP on Saturday summoned a National Executive Committee (NEC) meeting for Wednesday this week.

According to a statement by the National Secretary of the party, Senator Samuel Anyanwu, “all members of the National Executive Committee of our great party are invited to the 96th NEC meeting” scheduled to hold at the NEC Hall PDP National Secretariat, Wadata Plaza, Abuja, at 2p.m.
THISDAY gathered that the NEC meeting, which would take a final decision on the report of the 37-man committee on the zoning of presidential ticket of the party, was shifted from Thursday last week to Wednesday this week.

Abdullahi noted in the report that the four northern aspirants had visited Babangida and gave him the mandate to lead the process for a consensus and also agreed to abide by the outcome of the decision.
“The former president encouraged the aspirants to have a resolution within themselves and come up with one candidate, which they reported back to him after some days and asked him to go ahead and pick one out of the four, General Babangida on his part opted for inclusion, through wider consultation and assigned me to design criteria and carry out the necessary consultations with elders and leaders across the three geopolitical zones of the North.

In its recommendation, which was approved by Babangida, the report endorsed Saraki and the Bauchi State governor.
The report also thanked all the aspirants and “former President Ibrahim Babangida for entrusting them with the conduct of this exercise and in the hope that all parties involved would continue with mutual consultations aimed at the overall success of the party.
“For this exercise, it is hereby resolved that Governor Bala Mohammad from the North-east and former Senate President Bukola Saraki from the North-central be presented as the northern consensus candidates for the moment.

“The successful aspirants are hereby urged to work together to make allowance for further consultations to foster understanding among themselves, and the PDP community to ensure a rancour-free primary election in which all eligible candidates would be free to exercise their rights.
“We sincerely commend the sportsmanship and statesmanship exhibited throughout the exercise by all those involved and urge continuous cooperation and teamwork to ensure victory for the party,” the report explained.
But in a swift response, the Technical Committee for the Actualisation of Atiku Abubakar’s Presidency in 2023, has dissociated the former vice president from the consensus arrangement. Atiku’s Technical Committee, in its statement, noted that: “The report clearly stated that the aspirants who presented themselves for the exercise are: Governor Tambuwal, Governor Mohammed, Saraki, and Hayatu-Deen.”
The statement insisted that Atiku was never a part of the purported consensus arrangement and did not subject himself to this process.

“Therefore, he is not bound by any of the recommendations and conclusions of the purported report. Waziri Atiku Abubakar as a nationalist strongly believes that Nigeria has never been so divided as it is today, and any regional, zonal, ethnoreligious gang-up or consensus-driven in this manner will further deepen and widen the wounds that urgently require to be healed,” the statement added.
Also reacting in a statement issued on Saturqday, the Director of Organisation and Mobilisation for Tambuwal Campaign Organisation, Nicholas Msheliza has also stated that the Sokoto State governor was not part of the consensus arrangement.
The statement said: “The attention of Tambuwal Campaign Organisation (TCO) has been drawn to a news item that former Senate President, Bukola Saraki and Governor Bala Mohammed of Bauchi State have emerged as consensus candidates from amongst the four of us announced at a meeting in Minna, Niger State.

“This is, to be candid and forthright, not correct.
The correct situation is that the team met on Wednesday, April 20, 2022, at Bauchi Governor’s Lodge in Abuja and had a review meeting; and unanimously agreed that the consensus arrangement was not working.
“The team further agreed that Senator Saraki should come up with a draft statement on how to communicate this decision to the Nigerian public. This was the last time that members of the team sat and mutually agreed on anything. The proposed meeting to review and vet the statement scheduled for 10 pm on the same day was aborted unilaterally by Senator Saraki via a WhatsApp message.

“However, on Thursday, April 21, 2022, the same Senator Saraki circulated yet another WhatsApp message suggesting that members of the team should head to Minna for a meeting on Friday. Governor Tambuwal reached other members of the team and informed them that he stands by the decision of the team that the initiative is not working. This is the reason Governor Tambuwal was absent at the Friday meeting in Minna. As a result, therefore, the outcome of the Minna meeting has no consequence or any implication on the aspiration of Governor Tambuwal, who had earlier informed his colleagues of maintaining their agreed position that the initiative has collapsed.

Also denouncing the controversial consensus report, former Jigawa State Governor, Lamido called on all members of the party in the northern states to ignore it.
Lamido, in a statement issued yesterday, argued that the report does not represent the opinions of members of the party in the 19 northern states.
“The attention of key stakeholders of the PDP in the northern states is drawn to reports in the media that some northern elders have shortlisted two of our prominent and deserving aspirants as consensus PDP presidential candidates.

“Having widely consulted party leaders across the 19 northern states and FCT, it is hereby stated to our teeming party members and the general public that what Is reported in the media is only the personal opinion of those who issued the statement and not the position of the PDP members in the North!
“Discussions are ongoing with all the aspirants in our party to have a national consensus if possible or at least working towards having smooth acrimony-free National Convention. The position of the northern elders is not only injurious to the North but equally injurious to the northern aspirants,” Lamido explained.
In his reaction, Hayatu-Deen, in a statement by his campaign office, also stated that the process of arriving at a consensus candidate had collapsed.
“The candidates involved could not reach a compromise amongst themselves, resulting in the decision of our principal, Mohammed Hayatu-Deen, and Governor Aminu Tambuwal to discontinue the process,” the statement added.
It described the committee constituted by Abdullahi as completely faceless and the evaluation criteria subjective.
“It seems to us that this entire charade was designed to achieve a preconceived outcome,” the statement said.