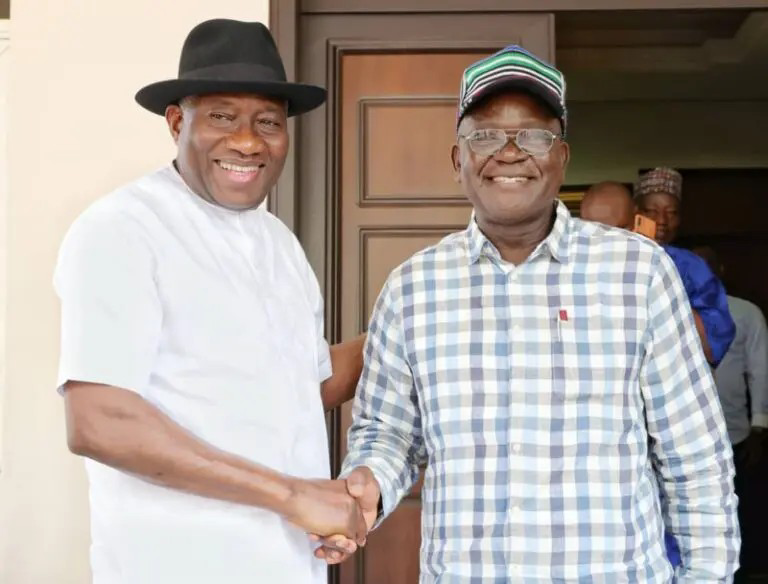 In a bid to strengthen the Peoples Democratic Party (PDP) family ahead of the 2023 general elections, Governor Samuel Ortom of Benue State on Tuesday, May 17th, 2022 visited former President Goodluck Ebele Jonathan at his Maitama residence in Abuja.

Governor Ortom served as Minister of State, Trade and Investment and later the supervising Minister of Aviation under Jonathan.

The duo met behind closed doors for more than 40 minutes.

Although none of them spoke to the press when they came out, they were beaming with smiles with the former President exchanging pleasantries with everyone on the Governor’s entourage.

It is believed that the fortunes of the PDP and the victory of the party in the forthcoming general elections may have been central in their discussions.

The former President has recently been rumoured to have dumped the party for the ruling All Progressives Congress (APC).

But the chairman of the APC in Bayelsa State, has denied reports that the former president is a card carrying member of his party.

Jonathan had recently rejected the N100m presidential nomination and expression of interest forms of the APC, allegedly procured by some pastoralists and a group of Almajiris from the northern part of the country

PREVIOUS POST Lamido of Adamawa to Amaechi: When next you come to Adamawa, you’ll come as president of Nigeria
NEXT POST Buhari to unveil new NNPC Ltd July 18 – Kyari