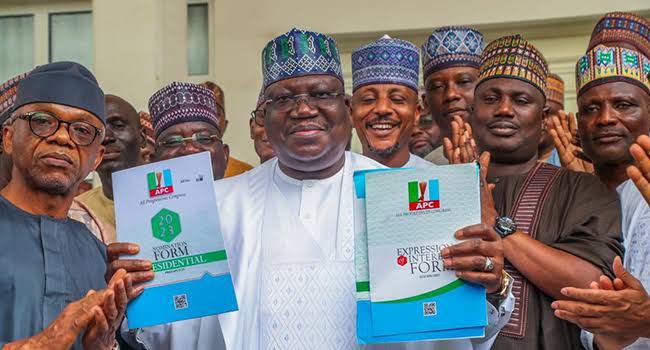 The Senate President, Ahmad Lawan, has submitted his presidential expression of interest and nomination forms to the All Progressives Congress (APC).

The governor of Imo State, Hope Uzodinma, and his Yobe State counterpart, Mala Buni, submitted the forms on behalf of Mr Lawan to the National Organising Secretary of the party on Friday in Abuja.

Mr Lawan, who is from Yobe State,North-east Nigeria, joined the presidential race on Monday after some supporters procured the N100 million forms and presented it to him.

Mr Lawan has been a lawmaker since 1999.He was a member of the House of Representatives from 1999-2007 and has been in the Senate since then, representing Yobe North. He was elected Senate President in 2019.

He is the only major aspirant on the APC platform from the North-east geo-political zone.

While addressing journalists, Mr Uzodinma, who is a former senator, said they helped the senate president to submit the form in the spirit of solidarity.

“Today we are here in solidarity to accompany our leader, the Senate President to submit his duly completed form and we have submitted the form.In the police, it is called esprit de corps,”

Mr Lawan already has the endorsement of the Whip of the Senate, Orji Uzor Kalu (APC, Abia).

The former Abia State governor said he endorsed Mr Lawan because the North-east, like the South-east, is yet to produce a president since 1999.

Mr Kalu had criticised politicians from the South-west and South-south for not supporting the presidential aspiration of the South-east.

He consequently pulled out of the race