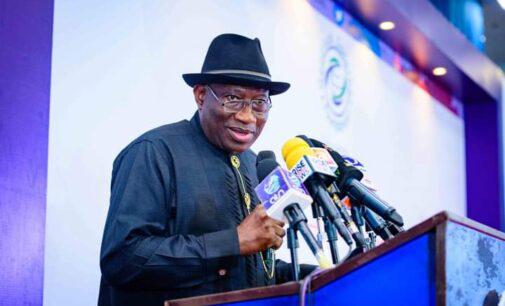 Former President, Goodluck Jonathan, has admonished politicians contesting elections and political parties to eschew violence ahead of the 2023 general election

Jonathan gave the advice on Tuesday in Abuja at the 2022 peace conference organised by the Goodluck Jonathan Foundation.

According to the ex-President, Nigeria must exist before it can have another President.

Calling on elective positions seekers to protect the most populous black nation from being destroyed, Jonathan noted that those interested in becoming president, governors, and legislators have roles to play in preserving the nation’s democracy.

He said, “We must have a state before you talk about having a President or a governor. If you destroy the country, then where do we need a President?”

Anybody who is interested in leadership at the level of a president, governor, senator, etc, you have the biggest stake to protect the nation.

“Both those who want to be President, governors and their supporters should first know that we need to have a nation before whoever you are supporting can emerge (into leadership position).”

The former Nigerian leader also mentioned hate speech and propaganda as posing the biggest threat to Nigerian democracy and appealed to Nigerians not to engage in such.

Some prominent Nigerians attended the peace conference titled, “The Role of Elections in a Multi-Ethnic Context.”

Some of the attendees included the Secretary to the Government of the Federation, Boss Mustapha, Governor Bala Mohammed of Bauchi State, Deputy Governor of Bayelsa State, Senator Lawrence Ewhrudjkpo, former Governor of Bauchi state, Isa Yuguda, Bishop Matthew Kukah of Sokoto Diocese, among others.