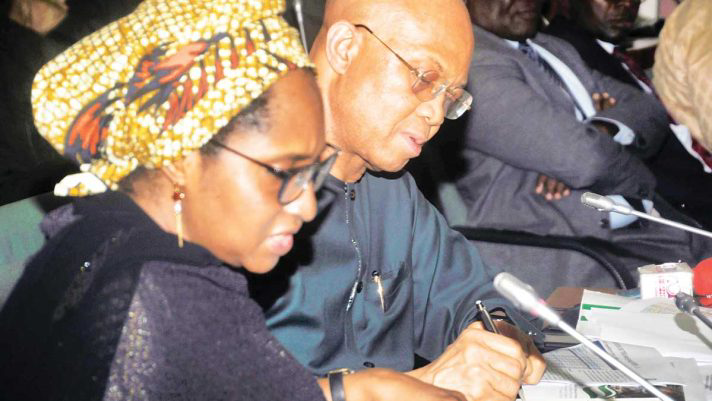 Ahead of the 2023 budget presentation, the Federal Government, yesterday, insisted that petroleum subsidy would remain in place until mid-2023. In addition, the government will borrow over N11 trillion and sell national assets to finance budget deficit next year.

The Minister added that the Federal Government is proposing an aggregate expenditure of N19.76 trillion for the 2023 financial year, a 15.37 per cent increase from the amount earmarked in the 2022 budget, with a projected deficit of N11.30 trillion, 54 per cent higher than the previous budget’s estimated deficit.

This was disclosed by the Minister of Finance and National Planning, Zainab Ahmed, while appearing before the House of Representatives Committee on Finance in Abuja, to defend the 2023-2025 Medium Term Expenditure Framework (MTEF) and Fiscal Strategy Paper (FSP).

She also said the government’s budget deficit is expected to exceed N12.42 trillion if it should keep petroleum subsidy for the entire 2023 fiscal cycle. According to the Minister, the government is proposing to spend only N3.36 trillion for petrol subsidy in 2023 based on the 18-month extension announced early 2022.

Recall that last week, the Minister had disclosed that government was spending N18.39 billion daily on PMS.

Zainab said the Federal Government was projecting the total revenue of N8.46 trillion, out of which N1.9 trillion is expected to come from oil-related sources while the remaining is to come from non-oil sources.

Meanwhile, the Federal Government is expected to peg crude oil price at $70 per barrel with projected daily oil production fixed at 1.69 million barrels per day at an exchange rate of N435.57 per dollar, while real Gross Domestic Product (GDP) is projected at 3.7 per cent and inflation at 17.16 per cent.

Explaining two scenarios of the budget deficit to the committee, the Minister said the first option involves retaining the petrol subsidy for the entire 2023 fiscal year.

According to her, in the first scenario, the deficit is projected to be N12.41 trillion in 2023, up from N7.35 trillion budgeted in 2022, representing 196 per cent of total revenue or 5.50 per cent of the estimated GDP. In this option, she said government would spend N6.72 trillion on subsidy.

Ahmed said the second option involves keeping subsidy till June 2023 and that this scenario will take the deficit to N11.30 trillion, which is N5.01 trillion of the estimated GDP. In this option, PMS subsidy is projected to gulp N3.3 trillion.

She noted that the first option is not likely to be achievable based on the current trend, while the second option would require tighter enforcement of the performance management framework for government-owned enterprises (GOEs) that would significantly increase operating surplus in 2023.

The projected deficit under the second option, the Minister said, is expected to be financed through new borrowings from local and international sources. This will include a total of N9.32 trillion in new borrowings, comprising N7.4 trillion from domestic sources and N1.8 trillion from foreign sources.

The government is expected to generate N206.1 billion from privatisation proceeds and N1.7 trillion in multilateral project-tied loans.

The two proposals have budget deficits far above the stipulated threshold in the Fiscal Responsibility Act. According to the existing Act, the deficit must not exceed three per cent of the GDP. The deficit could jump higher if the petrol subsidy is not terminated by June 2023 as President Muhammadu Buhari earlier said.

However, the law makes provision for the President to cross the threshold with the approval of the National Assembly.

Ahmed stated further that crude oil production challenges and PMS subsidy deduction by NNPC Limited constitute a significant threat to the achievement of government’s targets, as seen in the 2022 performance up to April.

She noted that the draft MTEF/FSP was prepared against the backdrop of continued global challenges occasioned by lingering COVID-19 pandemic effects, as well as higher food and fuel prices due to the Russia/Ukraine war.

She said: “The budget deficit is projected to be N11.30 trillion in 2023, up from N7.35 trillion in 2022. The draft 2023-2025 MTEF/FSP has been prepared against the backdrop of continuing global challenges occasioned by lingering COVID-19 pandemic effects, as well as higher food and fuel prices due to the war in Ukraine.

“Revenue generation remains the major fiscal constraint of the Federation. The systemic resource mobilisation problem has been compounded by recent economic recessions. Efforts will however focus on improving tax administration and collection efficiency.

“Bold, decisive and urgent action is urgently required to address issues of revenue underperformance and expenditure efficiency at national and sub-national levels.”

The Minister, while responding to questions from members of the James Faleke-led committee, said oil production had declined in the country.

Ahmed said: “My understanding is that security agencies and the national oil company (NNPC), as well as the regulators, have been working very hard to find solutions and what they tell us is that they are beginning to see improvement.

“From the performance in April at 1.3 million barrels per day and by July it was 1.4 million. We do hope that the increase will be very significant because it’s costing us not just N3.2 billion in terms of security cost, it’s costing us the revenue we have earned. At 39 per cent, the oil and gas revenue as at April is at very low performance.”

Ahmed said the Petroleum Industry Act (PIA) has given the NNPC Limited some independence from the federation and has to perform in line with the laws of the Company and Allied Matters Act.

“A lot of the expenditure the federation used to carry will now be carried by NNPC Limited. NNPC will be paying taxes and dividends and we believe in the medium term the federation will end up earning more revenue.

“It also means that the NNPC will need to go and borrow money on its own. That will improve efficiency in the company. They have to pay dividends and royalties to the federation which they were not doing before,” she said.

According to her, the government is projecting oil production of 1.69 million barrels per day for next year.

“Based on the projection of NNPC, they are hoping that all the measures taken now are going to result in increased production and we hope it works out. If it doesn’t, the deficit situation we found ourselves in will be even worse,” she said.

The Minister said Nigeria has been able to consistently, without fail, service her debt and the country does not have any projections, even in the near future, to fail in that obligation.

Ahmed said although the amount currently used in servicing debt in the country has overshot what was appropriated for in the budget, measures have been put in place to manage the situation.

She said: “In the budget, what we had planned was 60 per cent of revenue to debt but we had some months when the ratio goes up to 90 per cent.

“We actually follow the Medium Term Debt Management Strategy very strictly; the debts are not taken haphazardly and they are planned. They are appropriated and then we borrow against appropriation.’’

Speaking on the implication of the foregoing, the Minister disclosed that government may not be able to make provision for treasury funded capital projects in the 2023 fiscal year.

Chairman of the committee, James Faleke, said the current financial situation in the country requires that all revenue sources are explored as the government is short of revenue.