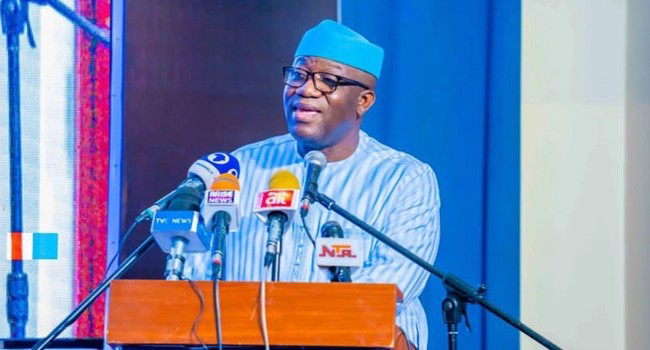 Governor of Ekiti State and Chairman, Nigeria Governors’ Forum, Dr Kayode Fayemi will formally throw his hat in the ring to contest the position of President of the country on Wednesday in Abuja.

As indicated in a statement signed by his Chief Press Secretary, Yinka Oyebode, the Wednesday’s declaration, tagged “Unveiling My Nigeria Agenda”, is the climax of the Governor’s extensive consultations across the geo-political zones in the last six weeks.

“Dr Fayemi, had after discussing his plan to run for the number one office with President Muhammadu Buhari last month, sought counsel, guidance and support from traditional and political leaders across states in the federation” the statement read.

The governor had touched a number of places to meet with key traditional rulers, political actors and statesmen ahead of the declaration.

“Remarkably, Dr Fayemi kick-started the consultation in Owo, Ondo State, where he met with the Olowo of Owo, His Royal Majesty, Oba Ajibade Gbadegesin Ogunoye. Owo is renowned as the seat of progressive politics in the country, being the birth place of the defunct Action Group (AG) led by the late sage, Chief Obafemi Awolowo” Oyebode noted.

The Afenifere leaders did a frank assessment of current trends in the country and concluded that the country needs a leader, a democrat with character, courage and compassion at this critical period. They scored Dr Fayemi high on these points and gave their blessings for his aspiration.”

The statement added, “Determined to deepen the consultations, Dr Fayemi also visited the Osemawe of Ondo, HRM Oba Adesimbo Victor Kiladejo at his palace in Ondo town and the Deji of Akure, HRM Oba Aladetoyinbo Ognlade Aladelusi at his palace in Akure. The consultation also took him to Ile- Ife, Osun State, the cradle of the Yoruba, where he met the Ooni of Ife, His Imperial Majesty, Oba Adeyeye Enitan Ogunwusi, who accorded him a grand reception that lasted for hours, interspersed with prayer sessions and cultural entertainment.

Dr Fayemi also met with the Olubadan of Ibadan, HRM Oba Lekan Balogun; the Alake of Egbaland, HRM Oba Michael Adedotun Gbadebo; the Awujale of Ijebu ode, HRM Oba Sikiru Adetona; and the Akarigbo of Remoland, who is also the chairman of Ogun State Council of Traditional Rulers, HRM Oba Babatunde Adewale Ajayi in their respective palaces, where he got royal blessings.

“Dr Fayemi’s consultation train later moved to the palace of Obi of Onitsha, Igwe Nnaemeka Alfred Achebe; King (Dr) Dandeson Douglas Jaja, of the Opobo Kingdom and Chairman of Rivers State Council of Traditional Rulers. He also visited and had talks with the Sultan of Sokoto, His Eminence Muhammadu Sa’ad Abubakar and the Emir of Gwandu, Alhaji Mohammed Jega during the Sallah holiday and both leaders respectively expressed their admiration for his personality and capacity as a bridge-builder and lover of peace.