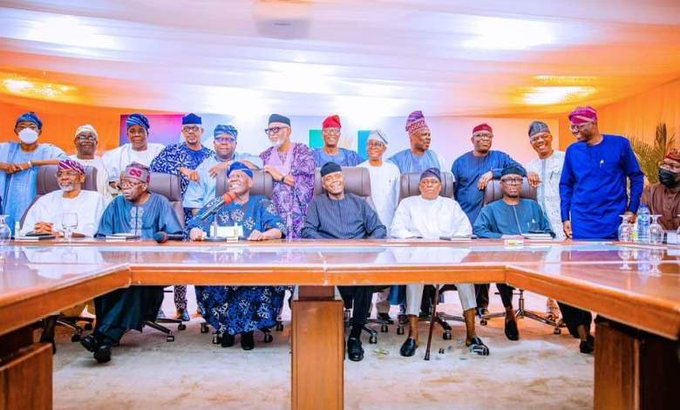 The chairman/chief executive of the Nigerians in Diaspora Commission (NiDCOM), Hon. Abike Dabiri-Erewa, has lamented the exclusion of women from the meeting of the All Progressives Congress (APC) leaders and stakeholders from the South-West to discuss the chances of the zone in producing the next president of Nigeria in 2023.

The meeting, which held on Friday evening in Lagos, was covevened by the duo of Chief Bisi Akande and Aremo Olusegun Osoba.

The aim of the meeting was to work out plans to ensure that the south-west does not lose the ticket because of the number of presidential hopefuls that have declared their interest to run.

It was attended by all presidential aspirants on the platform of APC from the zone while governors of the party from the South-West, Speaker of the House of Representatives, Ministers and other critical stakeholders also attended.

But it was an all-men affair as no woman was seen at the meeting.

But Dabiri-Erewa, who took to her verified Twitter handle on Saturday, expressed surprise that there was no single woman invited to the meeting of party elders and stakeholders from the South-West.

She wrote: “Hmnnn! Meeting of Apc SouthWest Elders/leaders.NOT ONE SINGLE WOMAN!From the whole of the SouthWest Dia is God oooooo🤒”