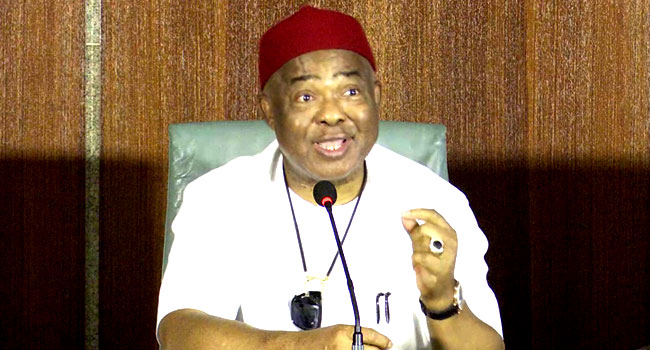 Imo State Governor, Hope Uzodimma on Tuesday said the choice of picking a running mate for Bola Tinubu lies with the ex-Lagos governor, rather than Governors in the ruling All Progressives Congress (APC).

On June 8, Tinubu emerged as the APC presidential candidate in the 2023 general elections after beating Vice President Yemi Osinbajo, ex-Transportation Minister, Rotimi Amaechi, and Senate President, Ahmad Lawan, among others.

A week after the party’s presidential primary, Uzodimma, who was also the Chairman of the APC special convention, briefed reporters in Abuja after visiting President Muhammadu Buhari.

“The decision to choose a running mate does not reside with any of us, the governors. It is the presidential candidate that will look at the local characteristics and every factor that will make him win the election,” he said.

“There is nowhere in the constitution of the Federal Republic of Nigeria where religion is a factor as to who becomes the President or running mate.

“We are looking for a united Nigeria where governance will be the issue, a President will be adjudged by his capacity to deliver democratic dividends.”

According to him, the South-East is ripe to produce Nigeria’s next President for the sake of equity and justice.

Despite the setback for the region, the governor pledged to work with Tinubu in the forthcoming election to ensure that the party retains power.

Uzodimma further underscored that what is most fundamental is the aim for a united Nigeria where democratic governance is upheld, noting that the South-East zone will work on what has so far prevented it from attaining the goal of producing a President.

Earlier, President Buhari had met with APC governors at the Council Chamber.