2023: Buhari To Endorse Favourite Among Osinbajo, Amaechi, Tinubu, Others Before Ruling APC Primary 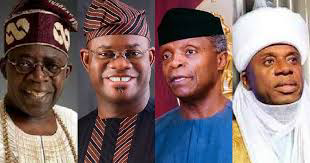 President Muhammadu Buhari will in May reveal his choice among those aiming to be his successor on the platform of the All Progressives Congress, The PUNCH reports.
Quoting a presidential source, the newspaper reported that the President is critically studying the aspirants, their attitudes, actions, backgrounds and others before either making his pronouncement on the issue or directing his trusted aides on whom to queue behind among them.

Some of the aspirants, who have made their intentions known to run for the presidency are Vice-President Yemi Osinbajo; Minister of Transportation, Mr Rotimi Amaechi; Minister of Labour and Employment, Senator Chris Ngige; a former governor of Lagos State, Asiwaju Bola Tinubu; Kogi State Governor, Yahaya Bello; his Ebonyi State counterpart, David Umahi; a former governor of Abia State, Senator Orji Kalu; and an ex-governor of Imo State, Rochas Okorocha.
They have openly declared their interest to succeed the President, whose second term ends on May 29, 2023.

Others rumoured to have presidential ambition in the party but have yet to declare their intentions include the Governor of Ekiti State, Dr Kayode Fayemi; and the Governor of the Central Bank of Nigeria, Godwin Emefiele.Buhari had expressed fear that his favourite presidential candidate might be “eliminated” if he revealed the person’s identity.

He stated, “I am not interested. I believe that whoever wins the poll should be sworn in as the next leader of Nigeria.
“All important things have been documented. No one should ask me to appear before the court to give evidence on any issue (public funds). All important things are already on record. I am sure about that.”

When asked about his preferred successor, the President replied, “I won’t tell you my favourite for 2023; he may be eliminated if I mention him. I better keep it a secret.”
The ruling party has fixed May 30 and 31 for its presidential primary election.

The APC, in a letter addressed to the Chairman of the Independent National Electoral Commission, Prof Mahmood Yakubu, dated April 6, notified the electoral body of the dates and schedule of its primaries for the nomination of candidates for the 2023 general elections.

The letter was signed by the party’s National Secretary, Senator Iyiola Omisore.
“This serves as a formal notification, pursuant to the provisions of Section 85 of the Electoral Act, 2010, as amended.
“Kindly arrange for your officials to monitor the exercise accordingly. While hoping to receive your cooperation, please accept the assurances of my highest esteem,” the letter read in part.

However, the Presidency source said there was no way Buhari would allow all the APC presidential aspirants to go into the race without having an input.He said, “You saw how he handled the race for the chairmanship of the party? Was it rancorous? No, it was not. The President knows what to do at the right time.

The man, who is the national chairman of the party today, was not even in the race in the beginning. And he said so when he assumed office. He said he was never interested about a month before the election.“The President knows the characters of those in the race. He knows their antecedents and what they can do or how they will behave when they get to power.

So, he will never allow the party to go into the primary without giving direction. Have you ever seen an incumbent, who is not interested in who his political party will present as his likely successor? Even the governors are equally doing the same thing at the state level.“So, I am sure the President will speak next month before the presidential primary. He is a tactician. He knows how to handle such a delicate matter.