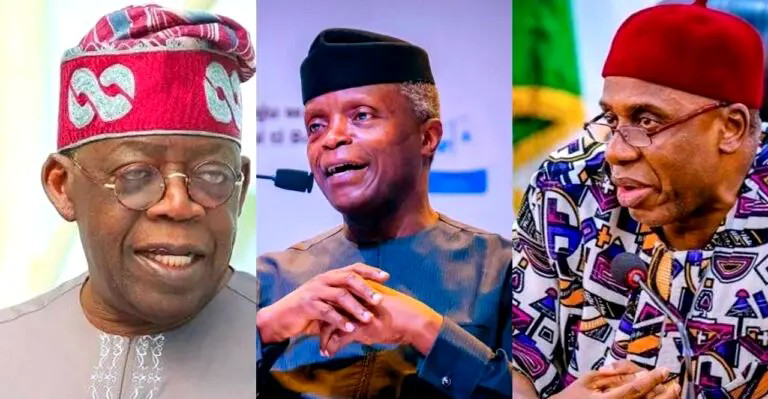 The claim that some governors are pushing for an idea that one of them should succeed President Muhammadu Buhari in 2023 is creating anxiety in the All Progressives Congress(APC).

Whereas two of the party’s governors – Yahaya Bello of Kogi State and his Ebonyi counterpart, Mr Dave Umehi – have already signified their intention to vie for the APC presidential ticket ahead of the 2023 general elections, Governor Kayode Fayemi of Ekiti State was expected to conclude his consultations last week preparatory to publicly declaring his presidential bid.

Fayemi is the Chairman of the Nigerian Governors Forum (NGF), the umbrella body for governors, regardless of party, in the country.

The idea was said to have been floated within the NGF that, with the experience the members serving their second term have garnered, any of them is as good as any of the veteran politicians also aspiring to succeed Buhari.

Other front runners in the race for the presidential ticket in the APC are Asiwaju Bola Tinubu, Vice President Yemi Osinbajo, Transportation Minister Rotimi Amaechi and Labour Minister Chris Ngige, all from southern Nigeria.

The propenderance of the presidential aspirants of southern origin appears to be so in the APC following the understanding that since the incumbent is from the North, the successor should be from the South.

The North/South rotation of the presidency has gained traction since 1999.

While Yahaya Bello, according to sources, is being supported by the immediate-past National Chairman of the defunct Caretaker Extraordinary Convention Planning Committee CECPC, Gov. Mai Mala Buni, among others, Fayemi is said to be making further consultations across the country while a group aligned to him, The Nigerian Agenda, TNA, has also been visiting stakeholders and staging pro-democracy events.

And whereas, the governors of Lagos, Osun and Kano, Mr Babajide Sanwo-Olu, Mr Gboyega Oyetola and Dr Abdullahi Gandoje respectively, are said to be in bed with Tinubu, the same cannot be said of Osinbajo.

Rather than lose out, some of the governors, it was learnt, are considering the possibility of having a meeting within the next two weeks to deliberate on the subject matter.

“The division among the governors is due to competing loyalties. The fact is that while majority of them want President Muhammadu Buhari to keep to the pre-National Convention agreement to allow them nominate from among themselves, a handful of them have their primary loyalties. You have Bello and Fayemi who are contestants and you have those who are aligned to Asiwaju and the vice president respectively”, a source told this paper.

“However, they don’t want to be ‘ambushed’ like it happened during the National Convention where their inability to present a common front from the word go made Mr President to pick for them”.

Already, Fayemi is said to be in quiet consultations with critical stakeholders. Sources in the know said the consultations are largely driven by some political and corporate players.

“He is at present meeting with his colleague governors to get their buy- in.

Even though, as NGF Chairman, it could be assumed that he could access his colleagues using the Nigeria Governors’ Forum (NGF) and or the Progressive Governors’ Forum (PGF) platforms, JKF has chosen to go meet them in their respective states, while he met some in Abuja”.

Meanwhile, some strategists in APC, Sunday Vanguard learnt at the weekend, have launched a fresh plot against the understanding that the 2023 presidency has been zoned to the South.

The strategists are believed to be scared stiff that the oppositon Peoples Democratic Party (PDP) may pick its candidate from the North and, should that be the case, the outcome of the 2023 presidential election may not be favourable to the APC.

They are, therefore, seriously considering drafting a northern governor in their party into the race”, a leader of the APC close to the development told Sunday Vanguard.

“If they succeed, the governor may announce his aspiration anytime from now as the plan was to unveil him immediately after Sallah. They are keeping their choice secret. Yahaya Bello from Kogi State is in the race but the strategists are looking beyond him. They believe he has no electoral value”.

“According to the source, the strategists are also looking at Gbenga Olawepo- Hashim from Kebbi.

“The name came from the blues but they are attracted to him because of his South-West connections and his youthfulness. Until recently, he claimed Kwara as state of origin, but he now says he has traced his roots to Kebbi State. How this plays out is left to be seen”, he said.

“Former President Goodluck Jonathan is also being considered as a viable option. There is renewed pressure on him. They do not mind him if that will pacify the South. For cooperating with the Buhari government, they believe he should be considered. Another factor they are considering is that he will do only one term and power will revert to the North”.

The month of May, observers believe, may witness explosive politics the nation has never seen.

Candidates who have declared for the presidency are either pressing on with their campaigns, meeting and wooing delegates to the primaries scheduled for May 30 to June 1, or oiling their campaign machines.

In a related development, there are indications that the emergence of another APC presidential aspirant from Rivers State could impinge on the chances of Amaechi.

Founder and President of Belemaoil Producing Limited, operators of Oil Mining Lease 55, Mr Tein T. S. Jack-Rich, who is also from the state, just declared his intent to run for President.

A member of the South-South APC, who did not want his name mentioned for fear of possible backlash, accused some unnamed forces of trying to whittle down the chances of Amaechi by pushing the aspiration of Jack-Rich.

“Already, you know that Rivers State governor, who is of the opposition, is also contesting. While that may not really affect Amaechi, Jack-Rich’s aspiration has been welcomed by some anti-Amaechi forces who see him as capable of deploying his huge war-chest to split delegates from the zone in the primary election”, he said