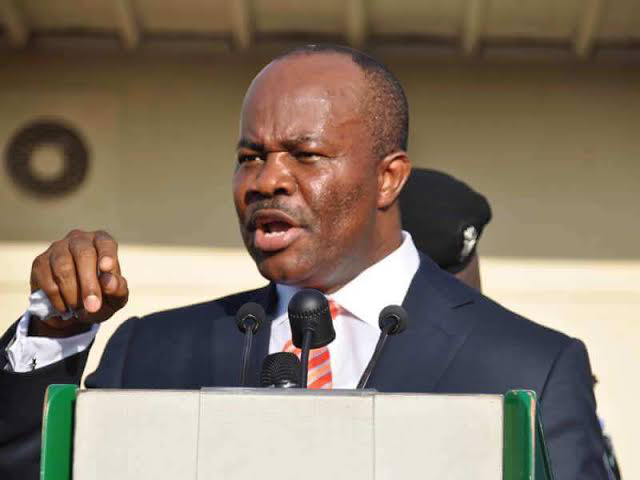 Akpabio is seeking the presidential ticket of the All Progressives Congress (APC).The two-time former governor of Akwa Ibom State, Akpabio, made the declaration at Ikot Ekpene town in the south-southern state on Wednesday

No fewer than 15 members of the APC have earlier declared their intention to contest the presidential election.

Like other aspirants on the APC platform, it is expected that Akpabio will pay a sum of N100 million to pick up the party’s nomination form.

Meanwhile, a  banner with the caption “People’s Democratic Party, Akwa Ibom State Chapter in support of His Excellency, Chief Dr Godswill Akpabio for President in 2023”, which was sighted at the venue where Akapbio is declaring has reportedly generated reactions in the state.

The development threw members of both parties into confusion as the leader of the PDP and incumbent governor, Udom Emmanuel, is also contesting for President in 2023 under the PDP.

Reacting to the banner, State Publicity Secretary of PDP in the state, Borono Bassey, in a statement described the development as the handiwork of mischief-makers.

“We have seen a photograph of a banner with an inscription to the effect that a party with the name- “People” Democratic Party is in support of the presidential rally of the Minister of Niger Delta, Chief Godswill Akpabio.

“Whereas the aforementioned “Party” does not exist as a duly registered Political Party in Nigeria and certainly not in Akwa Ibom State, we understand that the innuendo that the mischief-makers set out, but failed to achieve, was to use the name of our Party ‘The PDP’ to score points.

“In light of this, we are moved by sympathy to wonder why Akpabio’s handlers chose a day like this to embarrass their principal by reminding him that any of his political aspirations will amount to nothing if such aspiration does not come on the platform of the only Party in Akwa Ibom State – the Peoples Democratic Party