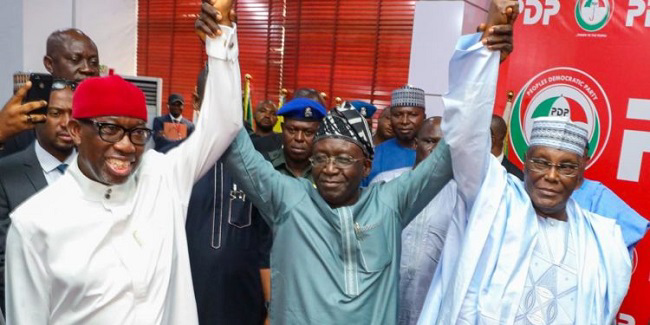 THE presidential candidate of the Peoples Democratic Party (PDP), Atiku Abubukar, has given reasons he unveiled Governor Ifeanyi Okowa of Delta State as his running mate in the next year’s election.

He gave the reasons during the presentation of Okowa to the party’s national caucus at the national secretariat, Abuja, on Thursday.

The presidential candidate said in arriving at his decision, he held consultations to seek input and contributions of relevant stakeholders.

He regretted that he had to choose one from the shortlist submitted to him by the party, adding that it was a difficult task to arrive at his decision.

In announcing his choice of the Delta State governor, he said Okowa satisfied all the qualities he had outlined.

Atiku, in his speech, said he wanted a vice president with the qualities of a president, who could succeed him at a moment’s notice, that is, a president-in-waiting.

He added that his running mate had to be ready to work with him from day one in tackling the challenges besetting the country, noting that he had promised governors of the party that he would choose from among them.

“In other words, the person must have the qualities to be president. He must have an appreciation of the deep rot which our country has been put into by the rudderless APC government; understand the great suffering that most of our people are going through and the urgency of relieving them of that suffering; understand the critical importance of economic growth and development to provide our young people with jobs, hope and a pathway to wealth.

“The person must appreciate the critical importance of education in the development of modern societies, so we can prepare our young people to be able to compete in the increasingly competitive and globalised world.

“My running mate must understand that without security, development will be very difficult because local and foreign investors who have been scared away already would not return to invest in our economy. Thus, my running mate will be a person who will stand by me as I confront the frightening level of insecurity in our land.

“As you know, the APC government went to sleep as huge swathes of our country’s territory fell into the deadly hands of gangs of criminals, including those masquerading as freedom fighters or pastoralists, while our farmers and genuine pastoralists are unable to go about their businesses.

“The costs in precious human lives and properties have been enormous. My running mate must also not only symbolise the imperative of reuniting our country, but also be able to work with me to achieve that objective.

“In addition, my running mate has to be someone who is not afraid to speak his mind and give honest advice and be by my side as I work hard to reverse the destructive impact of the past seven years of the APC government.

“In the United States of America from where we borrowed key aspects of our current presidential system, a running mate is used to balance the ticket, complement the candidate and, after victory, assist the president with governance. Sometimes a candidate is chosen who generates a buzz and adds huge excitement to the campaign.

“But today in Nigeria, we face huge challenges which leave us little room for drama. We have to win the elections and get to work immediately.

“My running mate has to be ready to start working with me, from day one, in addressing our country’s challenges. Nigerians will not accept anything less. That is why I promised the governors of our party that my running mate will come from among them. Our current challenges call for a government that is highly focused and disciplined
https://tribuneonlineng.com/12-reasons-atiku-picked-okowa-as-running-mate/

“I have sought the support, guidance and counsel of the PDP in selecting a befitting running mate who meets all or most of the qualities enumerated above.

“The wise men and sages of the party, put together by our NWC, have gone fishing and brought home an enviable group of awesome politicians that surpass these qualities.

“Every one of the recommended persons is a fit and proper individual to hold this office. While this makes me marvel at the bundle of talents that abounds in our party, it also compounded my task of choosing a single person from among them.

“Let me, therefore, pay tribute to my party and, most especially, to all those that made the shortlist that must now be narrowed down to a single person. They are all dedicated party-men suitable for this task. I wish all the recommended persons could be announced today as my running mates. Unfortunately, only one must be chosen.

“It is a difficult decision that I am called upon to take. But, as someone hoping to lead a complex country such as ours, tough and difficult decisions would remain a part of my everyday life. “Let me, therefore, start this momentous journey with a crucial decision about who, among the eminently qualified shortlist, would be my running mate.

“Accordingly, let me state that the person I have chosen as my running mate possesses all those identified qualities. He personifies not only the seriousness the current moment represents for our country, but also the future that our young people yearn for and deserve.

“He is a serving state governor who has demonstrated, in his state and through his conduct, that governance is about service to the people.

“I know that he will not only add excitement to our already energised ticket and campaign, but will also help to bring focus, discipline and stability to our government come 2023.

“I am pleased, therefore, to announce here my choice of running mate who will help to lead us to victory next year, not only in the presidential election but also in the governorship and legislative elections.

“And he will be by my side as I work hard every day to provide our people with security, revive our economy, improve education and unite our country. He has both legislative and executive experiences.

“Please join me in welcoming to the ticket the next Vice President of the Federal Republic of Nigeria, Governor Ifeanyi Arthur Okowa.

In his remarks, national chairman of the PDP, Dr Iyorchia Ayu, said the party presented three candidates to Atiku for his consideration.

He denied that there had been a vote by the PDP panel which had earlier recommended Rivers State governor, Nyesom Wike, for the position.

In his acceptance speech, Governor Okowa thanked Atiku for finding him worthy as his running mate.

He said: “Mr President-in-waiting, I must truly thank you for finding me worthy to be on this ticket. I do know that it was a very tough decision, even as you have spoken this afternoon. But I thank God that amongst my very qualified colleagues, even those more qualified than myself, I found favour and I’m here today as the vice presidential candidate of the party.”

Speaking with correspondents after his screening, he dismissed fears that Wike could pose a problem for the party going forward.

According to Okowa, Wike is strong party man who will not be disappointed because he realises that one person has to emerge at a point in time in a contest among brothers.

“But I want to assure you that Governor Wike is a very good man and his interest for this country and the party to be able to rise up to the challenge at the moment is strong and I do not feel that he is going to be disappointed.”

Okowa’s selection came against the recommendation by the special panel set up by the party to help Atiku to make his choice.

Until Wednesday night, Wike was the only person scheduled to be screened for the position.

Speaking to reporters, chairman of the PDP vice presidential screening committee, Chief Tom Ikimi, said Okowa was selected because he is “intelligent, physically fit and level-headed.”

In his remarks, the PDP national organising secretary, Umar Bature, said Okowa was screened because of the need to guard against the Bayelsa State experience, where the lack of qualification led to invalidation of the governorship ticket.